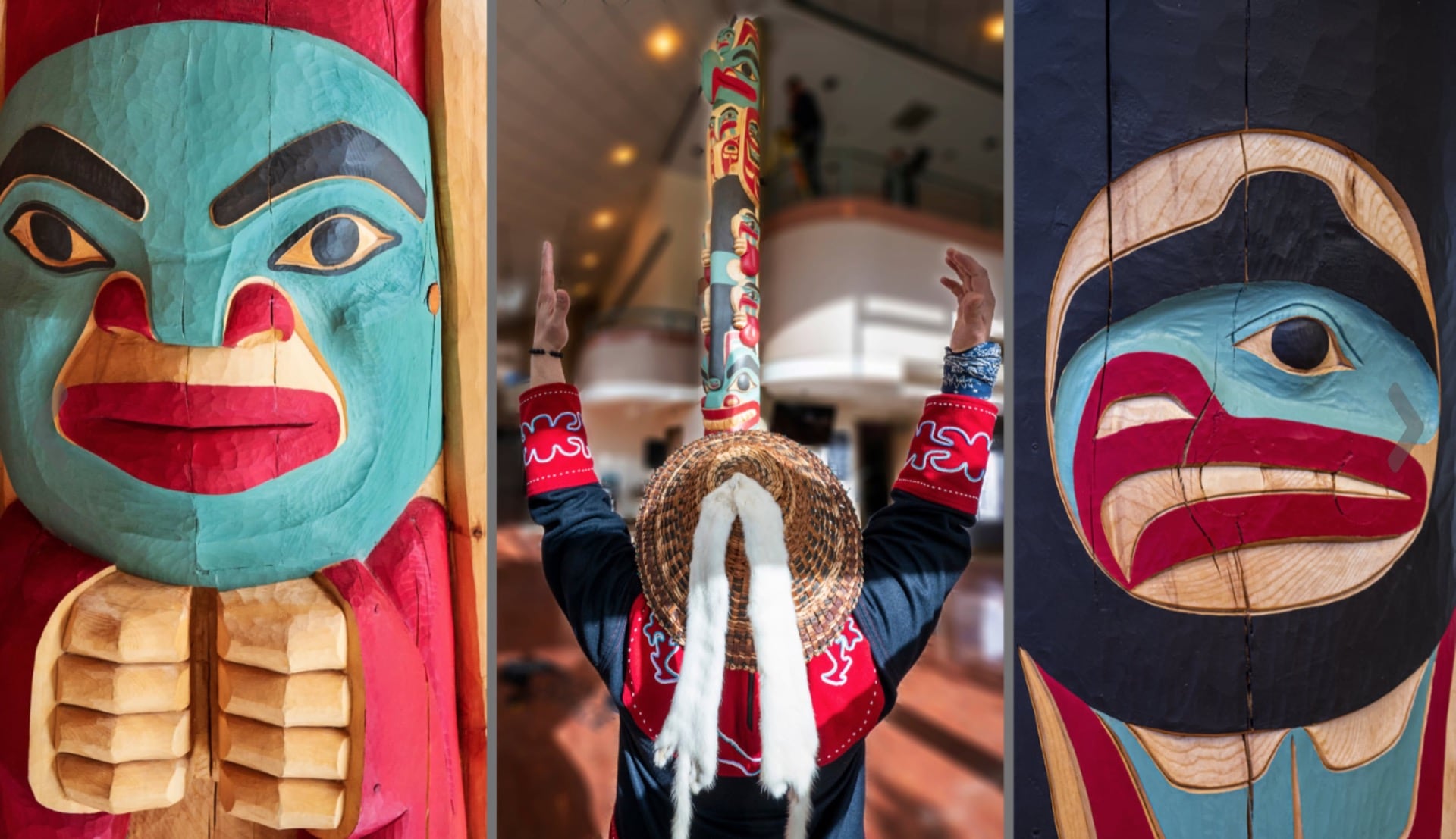 View Videos and Images at end of story.

In the last photo Pearl Callaghan took of her son, William, he’s asleep on a bed. There’s an eraser resting on his stomach, a sketchbook in front of him. Even in sleep, his fingers are closed around a pencil as if he’s about to draw.

Art is what saved him, says Pearl, after he was hit by a quad in Teslin in 2004. At the time, the close-knit Callaghan family thought they would lose him. Pearl says it was a miracle that he pulled through, albeit with a traumatic brain injury that resulted in post-traumatic epilepsy, which led to seizures, and ultimately led to his death, at age 33, in April 2016.

His death isn’t why Pearl is at the Yukon Arts Centre on a sunny Monday. She’s there to honour his life, same as the new totem pole that was recently installed inside the centre’s foyer. It’s so tall, it nearly touches the vaulted ceiling. It’s so heavy, it had to be carved out in the back so a special rigging device could even begin to raise it.

It’s painted with the same red and turquoise colours that William favoured in so much of his own work. The carvings represent his parents, Pearl and Michael, his sisters, Alex and Heather, and his nephews and niece, Malachi, Ethan, Peter, Rocco and Natalya. At the top is his grandmother, Elizabeth.

William was always creative. He was born into the Dakhl’awèdi clan, which is the killer whale/eagle clan of the Teslin Tlingit First Nation. William was encouraged by his sister, Alexandria McKenna, to start Tlingit dancing in 1998, with the Tagish Nation Dancers. Eventually, he became part of the Dakhká Khwáan Dancers with his sister, Heather.

After the brain injury, William was in a dark place for a year or so and was different. Pearl says the family (herself and William’s father, Michael, and sisters Heather and Alex) wondered for months if they’d ever again see the William they used to know. After much encouragement, he started carving with his cousin, Calvin Morberg at Sundog. The carving program opened up a whole other side of his creativity. It made him almost whole again.

William performed with his dance group, Dakhká Khwáan, at the 2010 Vancouver Olympics.  His first love was dancing, but he advanced in his carving, painting, drawing and print making. He decided art was what he wanted to do with his life and applied to Emily Carr University and was accepted.

“Art is a healer,” Pearl says, standing in the gallery. “It brought him back together.”

She’s surrounded by William’s work - a carved door, a print of his grandmother, Elizabeth, a painting of salmon roe, and small, perfect carvings. Many of them are painted red and a particular shade of turquoise that William’s best friend and cousin, Gary Johnson, says William loved.

Some of the work was made at home in the Yukon. Some of it was made when William was a student at Emily Carr. He just finished up his third year at the university when he had a seizure in his Vancouver apartment and passed.

It’s hard for Pearl to think about. Someone had always been with him in the past when he had seizures and was able to help him get to the hospital. She remembers the day he died, being at work, where she was overcome with a feeling of dread. She spent all weekend trying to contact her son over the phone, knowing something was wrong, but not knowing what. She called William’s cousin in Vancouver to check on him and her worst nightmare came true. He was gone.

Pearl touches the regalia William wore when he danced with Dakhká Khwáan. She points out the leather apron she made him, the mukluks he danced the soles right out (she had to re-sole them), she reaches gently for the fur trim.

The regalia was the hardest piece for William’s older sister, Alex. Seeing it at the opening, when the totem was raised, it was like he was standing there, she says, but not there.

At the same time, she’s grateful that all his work exists. In life, it was therapeutic for him - a true form of healing. Now, the work that remains feels like pieces of him and his spirit. It is therapeutic for those he left behind.

“Losing a sibling is like losing a piece of yourself,” she says. Some of the family members on the totem had more time with William than others. Her own boys, 24, 22 and 15, had their uncle as a mentor (“the traditional role in a Tlingit family is the uncles are mentors to the sons and William always fulfilled that role,” Alex says), teaching them to dance, drive, play basketball, what kind of music to listen to.

Heather’s kids are younger. Rocco proudly wears a blanket William made his nephew when Rocco was a baby. But Rocco’s younger sister Natalya never knew her uncle. It’s up to the rest of the family, Alex says, to tell William’s stories to them, to keep him alive in that way.

There’s no shortage of stories. Gary Johnson has plenty. Though they’re distant cousins, the pair didn’t meet until they were 25, when they were both dancing as part of Dakhká Khwáan.

At first, Johnson says he was jealous of William.

“He was big and confident and I was used to being the life of the party. I was the guy with the jokes and he was funnier than me!” Johnson says. However, that jealousy very quickly gave way to what Johnson calls a natural bromance.

William was open. He was warm. He was funny. He’d hold your hand when you were having a rough time. William taught Johnson to draw. They’d drive around town in a Chevy Astrovan, listening to hip hop. Once, while performing, they were trying so hard to impress the community (“and probably some of the ladies at the time because we were both single,” says Johnson) that William fell on Johnson and they had to improvise something that would make the misstep look intentional. When William started going to Emily Carr, they scheduled phone dates to keep up with each other’s lives.

William had a positive influence on Johnson’s life in other ways too, one of which was through William’s choice to be sober.

“I had a strong appetite to party and I had this friend who was sober,” Johnson says. “I wanted to be sober to be with him and he showed me that you could be cool and have fun and still be a reliable family man and source of strength to friends.”

William’s death has left a figurative hole in his life as well as a literal one. When they danced, they were always beside each other. Now, there’s only space there, Johnson says.

A totem doesn’t fill that space, of course, but it’s representative, of a life well-lived and cut far too short. Johnson was proud to be part of raising it.

“Will loved that shade of green, you know the shade that gets on your skin when you wear cheap copper? He loved that oxidized green,” he says. “Calvin really captured the look and the feel Will would have wanted. It’s so Will.” 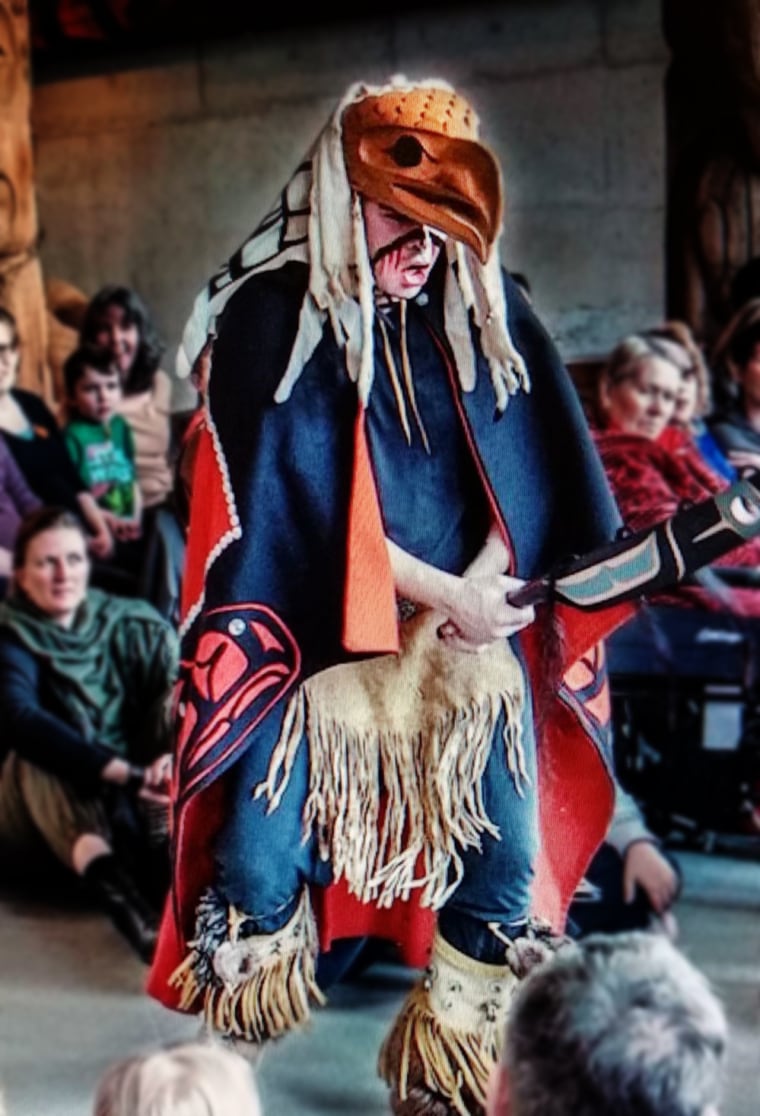 William “ Yaxkasei” ( Yawk-ka-say) Callaghan. William was born in Whitehorse and into the Dakhlaweidi clan (Killer Whale/Eagle) of the Teslin-Tlingit First Nation. His Tlingit name Yaxkasei, means “can see a long way”.

William was an exceptional young man – a gifted visual artist, dancer, a kind and truly generous individual who inspired many. He was a very respected person wherever his travels and studies carried him.

His carving career was supported and nurtured by established and respected Yukon artists and teachers as well as the Northern Cultural Expressions Society, formerly known as the Sundog Carving Studio.

Among his many achievements were national and international recognition for his work which has been displayed in galleries in Vancouver, Toronto, Alaska, and the United Nations in New York. William carved the totem pole displayed at the Northwest Company in Toronto and he was invited to paint a drum made by Bengie Clethero that was given to the London University in England.

At the 2010 Olympic Games in Vancouver, William participated as an Olympic torchbearer, as a dancer with the Dakhká Khwáan Dancers at the Olympic victory ceremony, and as a visual artist with the display of a bentwood box he created for the occasion.

William presented a beaver mask to former Governor General of Canada, Michaëlle Jean, during her visit to Yukon, as a gift on behalf of the Government of Yukon. His work can also be found in Yukon in many collaborative projects including, the Healing Totem on the Whitehorse waterfront and the dugout canoe at the Kwanlin Dün Cultural Centre.

He was a member of the Tagish Nation Dancers, the Dakhká Khwáan Dancers, and the Git Hayetsk Dancers. This reflected William’s love of dancing and performing his Tlingit ancestry.

In April 2016, William unexpectedly passed away having just completed his third year of a Bachelor of Fine Arts Degree at Emily Carr University of Art and Design.

Read as a tribute by Premier Sandy Silver in the Yukon Legislature. 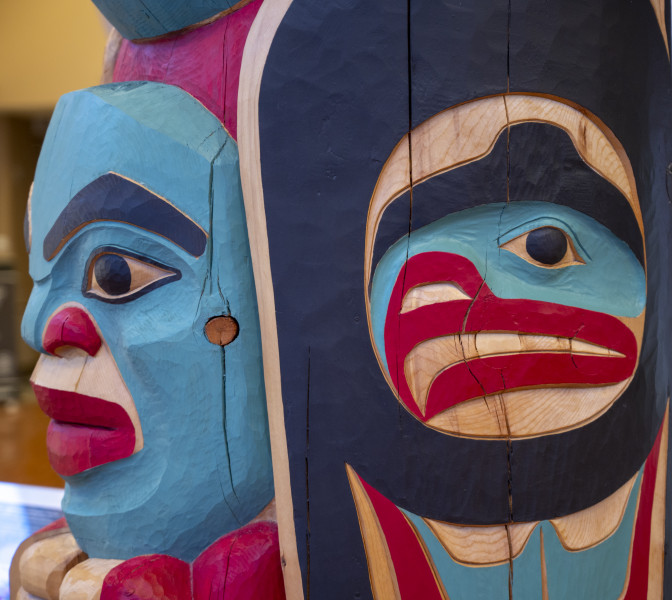 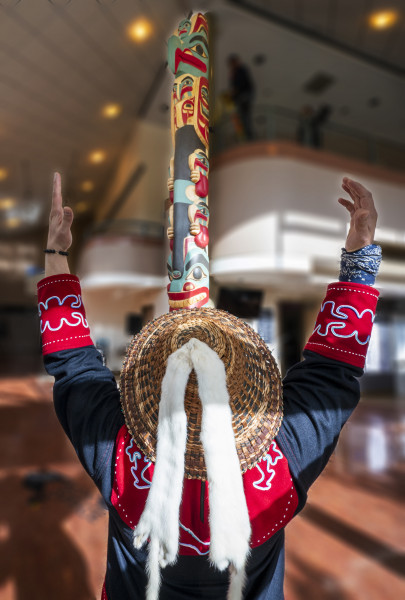 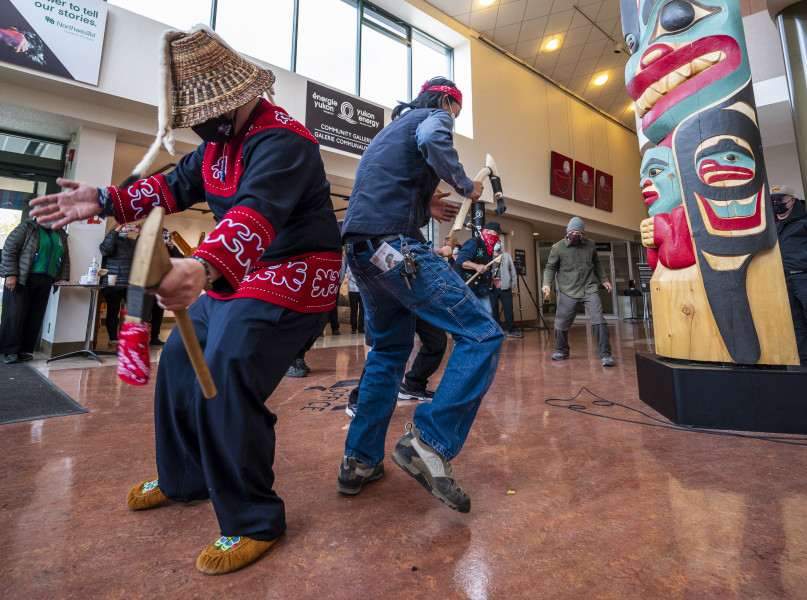 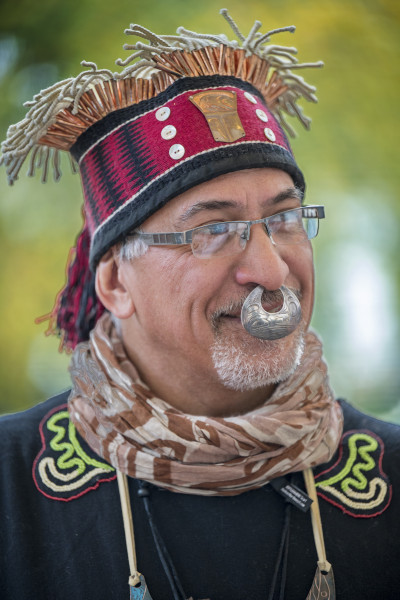 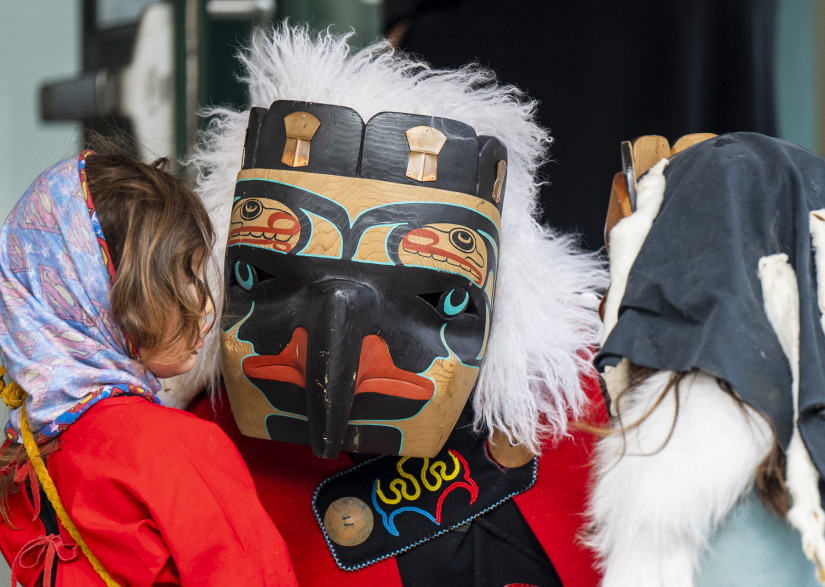 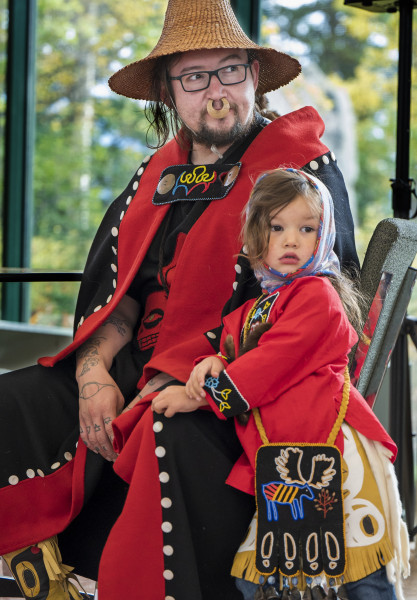 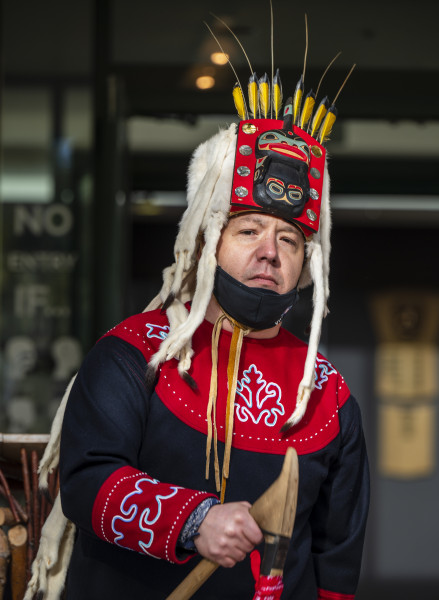