What's On
What's On
The Permanent CollectionThe Death of Bigfoot 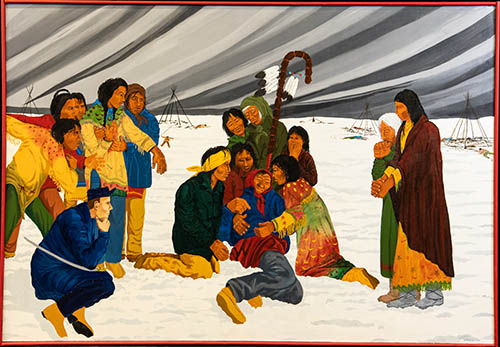 The Death of Bigfoot

The Death of Bigfoot is one of 21 paintings in Jim Logan’s The Classical Aboriginal Series, where Indigenous stories are told by deconstructing masterworks from the classical canon. Logan dismantles the colonial framework of the National Gallery of Canada’s collection highlight, Benjamin West’s The Death of General Wolf (1770), by replacing the English with vanquished followers of the Lakota-Teton Sioux Chief Big Foot surrounding their fallen leader. Logan also substitutes the token Indigenous man in West’s canvas with a settler military officer in the same pose of reverent mourning. By subverting the 1759 Quebec battlefield scene, the artist sheds light upon an overlooked moment in North American colonial history, the 1890 Wounded Knee Massacre.