What's On
What's On
The Permanent CollectionIcarus Descending 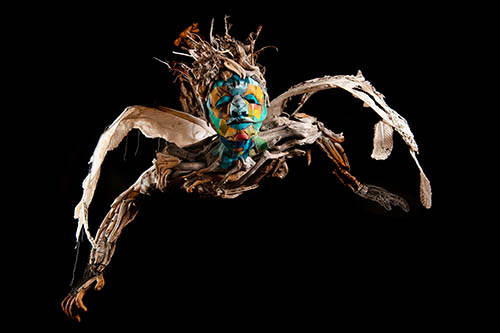 The story of Icarus’s fate is one that has inspired numerous works of art, however for Suzanne Paleczny it is the story of Icarus’s father, Daedalus, which proves to be the most interesting. Daedalus uses his skills as a craftsman to create wings of feathers and candle wax in hopes of escape. Paleczny’s piece draws on Daedalus’s use of resources as she combines numerous materials to craft the suspending sculpture. Taking inspiration from fellow members of the Southern Lakes Artist Collective (SLAC), Paleczny sought support to develop the multi-media work, appropriating techniques and materials from her artist friends. The Tagish-sourced driftwood that forms the body is enhanced by ceramic limbs and a glass centre. Each medium pertains to a member of the collective: the paper wings for example, were developed at a workshop led by Helen O’Connor, while the canvas and wire head was created with guidance from Paul Baker. The end result is one that truly encompasses SLAC’s collaborative directive and Paleczny’s cross-disciplinary approach to artmaking.