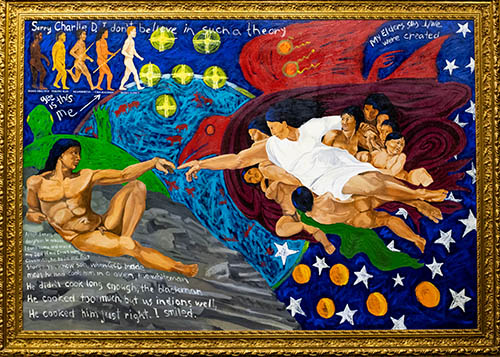 A Re-Thinking On The Western Front

In A Re-Thinking on the Western Front, Jim Logan reimagines Michelangelo’s famous Sistine Chapel fresco, The Creation of Adam, as one pervaded by Indigenous narrative. Part of the Cree/Sioux-Metis artist’s The Classical Aboriginal Series, where Western masterpieces are appropriated to challenge the canon’s racial and gendered hierarchy, this monumental portrayal re-conceives the Eurocentric biblical figures of Adam and God as an Indigenous man and matriarchical Creator. Surrounded by Her sacred clan, the Creator is enthralled by the Raven/Thunderbird. She assertively gestures towards the man, who’s hand gently extends to meet Hers as he reclines upon the back of Turtle Island. The image is further destabilized with the artist’s critique of Darwin’s theory of evolution in the upper left corner of the canvas. The illustration of human evolutionary stages is put into question through the artist’s hand-written annotations. By bringing together contrasting notions of human existence, reframed through an Indigenous lens, Logan powerfully confronts dominant ideologies.