About
About
NewsTheatre in the round gets off the ground

Theatre in the round gets off the ground

The Guild Hall's 'Round Back series plays until October 3. Photo by Erik Pinkerton Photography.

In planning its fall programming, the Guild Hall considered the current climate—both the distancing measures in place these days, as well as the actual weather.

“The one big challenge is just the unpredictability of it,” says Brian Fidler, artistic director at The Guild Hall. “We had to figure out how to set up the tarp (over the stage) so the performers didn’t get unexpected soakers as they walked off the stage.”

That’s because the stage is, for now, located outdoors, behind the Porter Creek theatre. On August 7, the Guild Hall launched its latest series (which runs to October 3), ‘Round Back.

“It really grew out of the pandemic because we were cleaning up back there (for something to do) and we were noticing awesome set pieces sitting around behind the hall. Then we started to see it as a venue back there because we aren’t allowed to have larger groups inside.”

Fidler says staff got to work coming up with an outdoor theatre that could follow the guidelines laid out by the Chief Medical Officer of Health, with one added protection—they’d keep people dry during what has proven to be a very rainy summer. 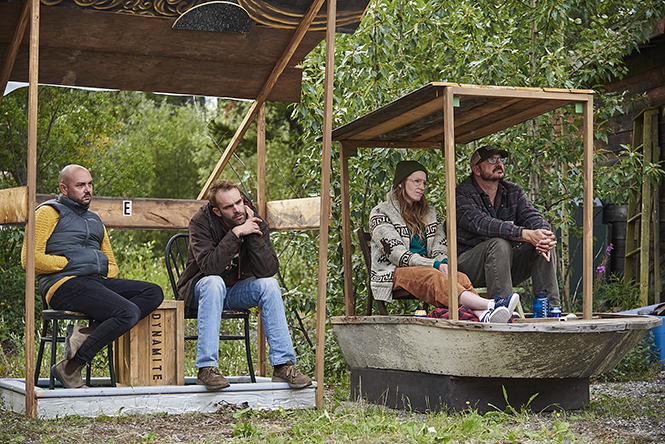 The result is a number of covered seating “islands.” Together, these islands accommodate an audience of up to 30. The horseshoe-shaped configuration allows for people to be seated alone, or in groups of two, three, or four. It looks a little like a cross between the seating for Greek theatre and a Game of Thrones-style duel.

Fidler says this circular layout has presented both a challenge and an opportunity to performers in that they now have to perform to all angles, rather than to the back of a room.

“It’s an exciting performance to watch,” says Fidler. “Almost like watching a film because (performers) are not concerned with shooting straight, so they’re moving naturally. They’re connecting in different ways than they would in a theatre.”

Since opening night (fittingly, a staged reading of Mr. Burns, a Post-Electric Play, about how the world is affected by a fictional pandemic), Fidler says the kinks have been worked out (“one night it rained hard and we figured out where all the leaks are”) and the Hall has roughly 11 different events scheduled to take place as part of the series.

There’s something on every Thursday to Saturday until the beginning of October. Programming includes music from Yukon’s Ryan McNally, as well as Claire Ness, comedy nights put on by the Guild and the Yukon Comedy Collective, a performance by Gwaandak Theatre, a variety show by Velvet Antler, and more.

All are listed online at yukontickets.com.

Tickets are available on a sliding scale to ensure everyone has access to shows at a time when some people are experiencing uncertainty or loss of employment.

Fidler says they don’t want money to be a concern to people when it comes to attending.

“Just come out and see stuff,” he says. “It’s a very different animal, having shows outside … anything is possible out there. Which is kind of exciting.”