About
About
NewsLearning a new language to tell stories

For Janet Patterson, curating is similar to journalism. A former reporter, Patterson didn’t realize how applicable her journalistic skillset was to the world of art until she co-curated a show at Yukon Artists @ Work (YAAW) in the fall of 2021.

“In a way, it’s just like storytelling,” Patterson says over the phone in mid-January. “It’s just a medium.”

And it’s a medium she’s excited to explore as one of the first participants of the RBC Emerging Curator Program at the Yukon Arts Centre (YAC).

The program, new this year, pays two curators a $4,000 curatorial fee (plus $1,000 for exhibition expenses) to plan, program and present a mix of artist and community-led projects in two of YAC’s three gallery spaces from January to May. 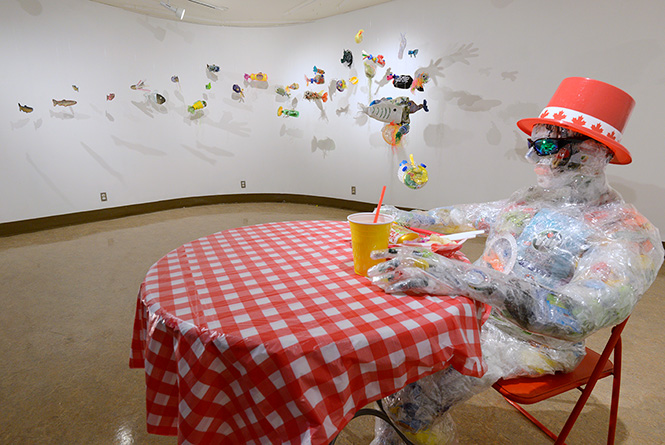 Janet Patterson's Unless... exhibit in the Yukon Energy Community Gallery in Dec. 2020. Patterson will be curating a show in the gallery. Mike Thomas photo

Patterson, who says art has always been a part of her life in some way, only dove into the field full-time after the end of her career as a communications specialist. She’s been developing her own practice (sculptural pieces that often use natural, recycled and found objects) in recent years, but last fall was her first foray into helping others explore theirs with YAAW’s Experienced Materials. The RBC Emerging Curator Program will allow her to build on that experience.

“It’s just a whole other area of the art world that I'm excited to learn more about,” she says, adding that she doesn’t know if she’d have the same opportunity if she was living outside the Yukon.

“Here in the Yukon, we just have so many opportunities that perhaps in a larger centre, we may not have had … I didn't go to school to be an artist, so I'm primarily self-taught and just the fact that I've had opportunities to explore my art and practice it and share it with other people, I just think I'm very fortunate to have had that chance. And I think it's because here in the Yukon, we are very welcoming, I guess and open to people who want to try new things.”

Patterson is currently in the process of reaching out to individual artists she wants to program this winter and spring, and is hesitant to name specific artists before they’re confirmed. In a broader sense though, one of the themes she’d like to build a show around is that of housing.

Patterson says she’d like to revisit, in some way, that time 20 years ago when the City of Whitehorse relocated a number of downtown dwellings as part of its plan to develop Shipyards Park.

“There were a number of people who lost their home and moved on,” she says. “And I think, for many people who weren't here at that time, so anyone who came after, you know, the year 2000 may not know that story. And so I wanted to revisit that story with fresh eyes.”

Bauberger, whose practice includes painting, performance and writing, is also interested in fresh eyes when it comes to programming the youth gallery.

“Like, anyone can draw a flower,” Bauberger says. “But there’s something about a kid drawing a flower that is different and, in some ways, better than what I can do, right? It’s its own thing.”

To that end, the first exhibition Bauberger has planned is an extension of something she’s been doing at the Dalton Trail Gallery—an outdoor art space she established behind her Hillcrest home at the beginning of the pandemic.

In recent months, Bauberger and some of the kids in her neighbourhood have been painting cardboard flowers and installing them in the snow along the local trails. She wants to bring this work to the outdoor sculpture garden at YAC for a number of reasons.

One of them is that, last fall, she co-curated the same show Patterson was involved in at YAAW. When it ended, Bauberger took one of the sculptures down (a life-sized, cardboard bear puppet) to Shipyards Park for Wondercrawl. She performed in the sculpture for hours, leading to a bit of an epiphany for Bauberger.

“I love galleries. And I love making exhibitions in places that welcome people's imaginations to come into them and have an adventure. But I also love the idea that that's not all there is,” she says. “That part of my job as a curator was to take this piece of art off the wall and dance it for several hours until I was physically exhausted. It was it was profoundly satisfying … I'm excited by those kinds of possibilities.”

An added bonus of those kinds of exhibitions and performances that can take place outside the four walls of a gallery, says Bauberger, is that they’re resistant to various levels of covidity, something else she’s interested in exploring.

“I guess I hope that people are able to come out and play because we’ve been isolated too long. And one of the things art has always done is make points of connection in places so we feel closer to each other despite standing six feet or more apart.”

Applications for RBC Emerging Curator Program are presently closed, but visit yukonartscentre.com to keep an eye out for the next deadline.