Manual Cinema's Frankenstein is coming to the Yukon Arts Centre on March 12. Photos by Michael Brosilow.

On its surface, Frankenstein seems like a straight-ahead horror story, but Sarah Fornace views it as a cautionary tale for the modern age.

“Myself, as someone who is pro-technology and science, sees it that way,” says Fornace, the co-artistic director of Frankenstein, which comes to the Yukon Arts Centre in March. “What are you channelling your ambition into? Victor Frankenstein is self-aggrandizing rather than asking what the world needs … it’s like Silicon Valley developing 800 different juicers when there are very real problems we could be turning our attention to.”

This particular adaptation, from Chicago’s Manual Cinema, offers a unique take on Mary Shelley’s source material by braiding together the story of Shelley herself with the tale of Victor Frankenstein. 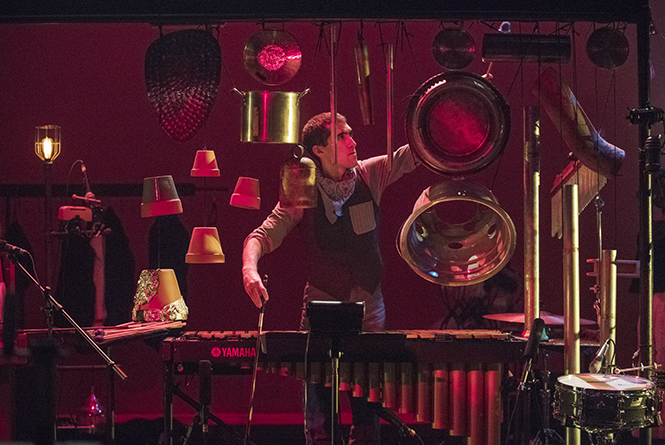 Fornace says Shelley wrote the Gothic classic after suffering a miscarriage and dreaming about reincarnating her lost baby. In a lot of ways, Frankenstein was Shelley’s way of processing that, so the story can be read as one of loss rather than as one of horror.

“It’s very much the story of the creature and the story of abandonment and of waking up because he really is like a newborn, new to the world in this giant body that has no context for him and that also causes terror for those around him.”

Shelley’s very personal connection to the story is one of the reasons Fornace says Manual wanted to bring Shelley into its telling of a tale that’s been told dozens of times.

“From silent films to Netflix, a lot of (those tellings) tend to be very male gaze-y,” says Fornace, who plays Doctor Frankenstein as well as Shelley. “Almost all male characters and a very narrow view. Shelley’s voice, as someone pregnant or post-partum, is an important part of the story for us.”

In fact, so many parts of Shelley’s story felt important (“there was such a wealth of information,” says Fornace) that Manual wrote three versions of the play before arriving at its current script.

One way in which the play does give a nod to more traditional tellings is that it draws from cinematic adaptations that paint Frankenstein’s creature as wordless, even though, in Shelley’s text, he focusses on learning language and is very articulate.

This gels with Manual Cinema’s approach to performance. The company is known for combining shadow puppetry, overhead projectors, multiple screens, puppets, actors and more to offer a unique sensory storytelling that doesn’t necessarily tell you anything—not in words, anyway.

“It’s hugely exciting,” says Fornace. “Visuals are one half of this experience and the other half is sonic.”

The play, which premiered in 2018, the 200th anniversary of Frankenstein’s publication, has since been performed in New York City, Chicago, Scotland, Houston and Nashville. It’s currently making its way up the west coast and will land at the Yukon Arts Centre on March 12 at 7 p.m.

Tickets are $35 can be purchased online at yukontickets.com.