About
About
NewsBehind the silver screen

Behind the silver screen

Jerry Granelli brings the spirit of Charlie Brown on stage

It’s the most beloved Christmas special to have almost never happened. It seems hard to believe. When A Charlie Brown Christmas aired in 1965, it was an instant hit and one that’s retained its popularity in the decades since. At the time though, CBS executives were desperate to scrap it before it saw the light of the tube. A jazz soundtrack wouldn’t appeal to kids, they thought. They also didn’t want untrained children doing the character’s voices and they hated the animation. In the end, the show only aired for two reasons—it had already been listed in TV guides and Coca-Cola jumped onboard to sponsor its airing.

“They put it on saying, ‘we’ll do it because it will never be seen again,’” says Jerry Granelli, the drummer in the Vince Guaraldi Trio, which recorded the soundtrack for the special in a single session back in the 60s. “And it’s a funny little thing that keeps right on going, all because of people who want it in their lives. They just want it in their lives. I don’t mean to be preachy, but it’s very simple. I think it’s the fact that people recognize that it was a group of people doing something with no ulterior motive. We weren’t hoping for success, it was fun and nerve-wracking to do. There was no ‘this is the one that makes our lives.’” 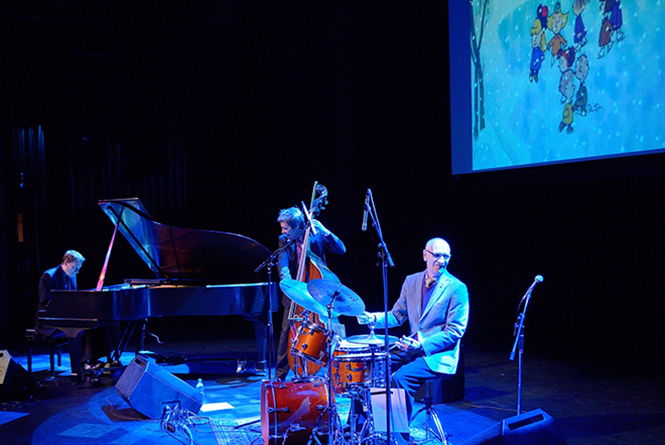 The Jerry Granelli Trio: A Charlie Brown Christmas will be at the Yukon Arts Centre on November 28. Photo by Steve Knight.

The special is still aired annually and, in recent years, Granelli has toured Tales of a Charlie Brown Christmas, a live performance of the album, accompanied by an oral history of the special that nearly wasn’t.

Granelli says people had been asking him to tour the music for years, but he had no interest. It was only when his manager started getting him involved in documentaries about the special that Granelli realized what a social phenomenon it was, and how much it had become a part of people’s lives.

That’s how, with the blessing of the Schultz family, he developed Tales to be what he considers a musical statement of its own rather than strictly a nostalgic journey.

“It’s a very fine line, as an artist, to walk like, ‘ok do I just want to tug heartstrings or make it a part of what my life is today?’”

And though he has made it something he says can serve as a great first jazz experience for any kid coming with their parents, he acknowledges that people bring their own emotions to the theatres he performs at.

“We have memories and we remember joy and sadness and sorrow and family times and I just really talk (in the performance) about how it happened and the musicians and how it just fooled everyone and how it touched human hearts,” he says, pausing. “And we have some laughs about how I never got paid really for a long time.”

However, as much as he is front and centre in the performance however (he now leads the Jerry Granelli Trio), Granelli is quick to point out it’s not about him.

“It really has nothing to do with me,” he says. “It’s just I’m the only one left who knows what really happened.”

He credits Schultz with the appeal that’s lasted since the 60s.

“Charlie was a very private person and a deep thinker and I think that’s present in (the special). Why do people want to look at a painting that’s 100 years old? Because we respond to something and what that is, I’m not bright enough to name, but I think it’s heart. Our humanness, you know?”

The Jerry Granelli Trio: A Charlie Brown Christmas will be joined onstage by the Selkirk Singers, students from Selkirk Elementary, and takes place at the Yukon Arts Centre on Nov. 28 at 7 p.m. Tickets are available online at yukonartscentre.com