Last year, when Alistair Maitland was approached by the Yukon Arts Centre to exhibit a series of photographs he’d taken, he said no way.

“I was just too broken,” Maitland says over the phone from the gallery at YAC, where those photos are now going up as part of a joint show between Maitland and local artist Meshell Melvin. It’s been more than a year since Maitland took most of his Doortraits—images of Yukoners inside their homes, looking out at the world they were isolated from at the time. These days, things are feeling more hopeful, but in the spring of 2020, it was dark.

“I wouldn’t even consider it. Not a chance,” he says. “I was so done. That was a really, really hard time. The Doortraits started as almost an act of desperation. It had been a couple weeks and just seeing all my work and livelihood pretty much wiped out because I was mostly [photographing] events and portraits and stuff like that. Everything just went to shit.”

In the middle of that spiral, Maitland says he saw fellow photographer Pat Kane taking pictures of people inside their homes in Kane’s home base of Yellowknife. He asked Kane if it was ok for him to use the idea in Whitehorse and Kane agreed. 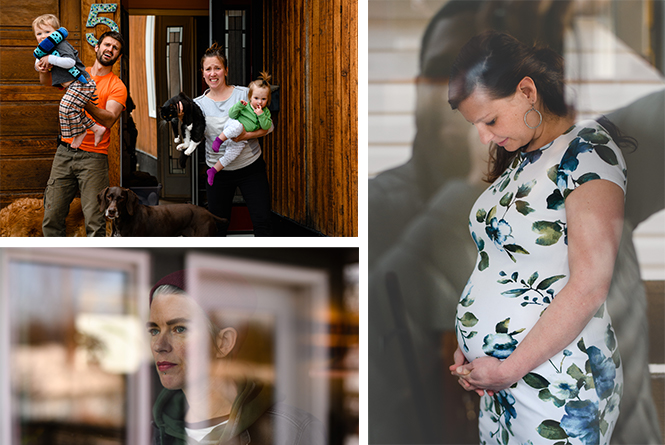 Initially, Maitland says, it was all about paying the bills. Eventually though, it turned into something else entirely.

“It was therapeutic I think,” he says and not just for the families that were stuck inside, seeing no one but Maitland outside their picture windows and storm doors. “That was a total two-way street because I was freaking out about my life and my work. And my, you know, seemingly unpronounced to me beforehand, how much my identity was linked to my work.”

He told people about his struggles and they shared theirs, whether they were older couples with compromised immune systems, or families where two parents were working from home while two kids were also trying to attend online school. It expanded his perspective on how the pandemic was impacting the territory. His work also served as a coping mechanism for his subjects.

“Some people were really cognizant of the fact that they wanted some kind of documentation of what was happening, both for themselves, but for the community at large as well.”

It was hard, but there were also moments of levity, of fun. People started dressing up, staging scenes, getting creative with the images. For the show, Maitland whittled his photos down from a collection of hundreds, including families, as well as City of Whitehorse volunteer award winners, CAFN graduates and more.

His work hangs in the Yukon Arts Centre Gallery alongside Melvin’s exhibit, Drawn Together: embroidered portraits 2003-2021. Melvin’s work is also portrait-centric, though her medium is completely different.

She created more than 1,000 embroidered portraits of people who attended Yukon festivals and events from Dawson City to Atlin in recent years, using a Universal Movement Machine—similar to a sewing machine. 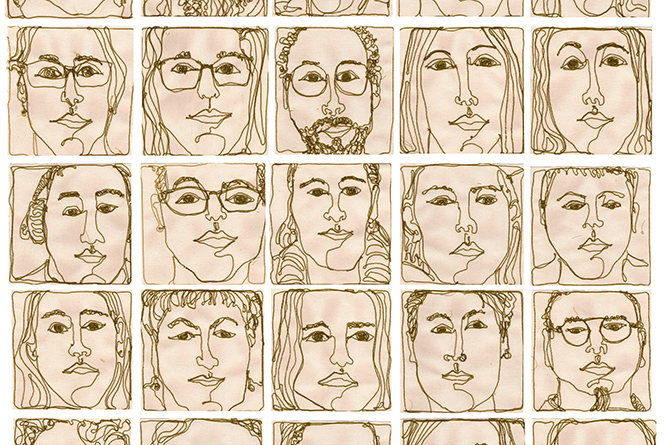 “Portraiture has a long history and tradition of being made (for the most part) in the privacy of the studio, as an indulgence of the privileged. Embroidery has an equally long tradition and adorns many of the textiles in our daily lives,” Melvin says in her artist statement.

“That these two familiar things come together in an unfamiliar way right before their very eyes is enough to spark the imagination of the audience. This light grows when the audience member becomes a model and a creative occasion is shared between us.”

The result is a stunning series of chain-stitched contour drawings, all done in the same thread, on the same fabric, to illustrate the sense of connection and community that Maitland’s images touch on.

“I love our Yukon community,” he says. “Because they’ve always been so giving and they always help out. More often than not it’s just Yukoners being themselves. They show up. Even if it’s just to their front door.”

The opening reception for Drawn Together: Drawn Together: embroidered portraits and Doortraits: Intimate Pandemic Images is June 5.  There are three different time slots for the reception. Choose one of the following times to RSVP: 11:00, 1:00, 3:00.

The exhibits will run until August 27. Gallery hours are 10am-5:00pm, Monday to Friday.