What's On
What's On
The Permanent CollectionUntitled 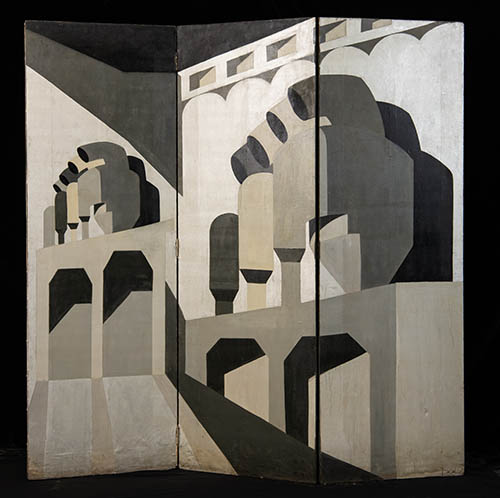 Lilias Farley lived, worked and taught art in Whitehorse from 1948 onwards. She began her career as an artist in British Columbia where she studied design and drawing at the Vancouver School of Art under Jock MacDonald and F.H.Varley. Known for her modernist sculpture and murals, Farley is often credited for helping nurture a strong interest in visual arts and a guiding hand in the careers of many artists in her community. Constructed from wooden frames and covered in stretched canvas, Farley’s painted three-panel screen depicts a highly stylized architectural structure, reminiscent of a factory warehouse. Rendered in a monochromatic palette of grey, vents and arches line the building’s façade with exaggerated shadows forming illogical perspective like that of Italian metaphysical painter, Giorgio de Chirico. Farley’s folded screens create an accordion-like support that further distorts the viewpoint of the composition’s architecture, foregrounding the sharp diagonal angles of the industrial building.