What's On
What's On
The Permanent CollectionLone Woman with Ravens 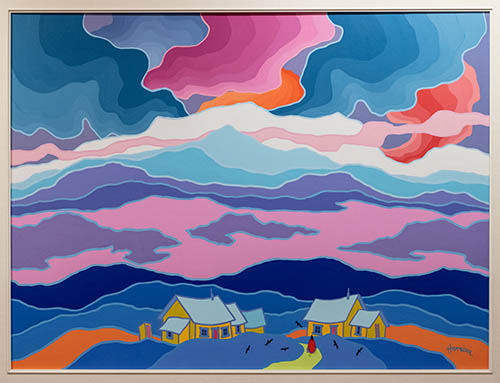 Lone Woman with Ravens by Ted Harrison is a reflection on both the isolation and strength of Northern communities in the winter. Rendered in the artist’s distinctive style, the staggering sky is comprised of undulating lines and delineated gradients of blue, purple and pink. The mountains merge with the rolling landscape that seemingly envelops the remote dwelling. A woman dressed in red follows a yellow path towards home as a flock of ravens surround her in solidarity. Defined by the artist as “imagination based on reality,” Harrison’s foregrounded figure against its endlessly rhythmical backdrop enters a sublime world anchored by the connection of humans and nature.