Climate change is a massive topic to tackle, but it’s the one a group of Alaskan teens wanted to take on when tasked with creating an installation for the Arctic Arts Summit, taking place in Whitehorse from June 27 to 29.

“It really worked perfectly with our mission about providing tools for communication because we realized a lot of teens kind of felt overwhelmed by the climate issue and didn't know quite how to engage,” says Missy Gaulke, educator and department coordinator at the Anchorage Museum, which coordinated the effort through its Teen Climate Communicators project. “We wanted to create a program that really was able to support teens and uplift their voices, and to engage them in being a part of the climate dialogue.”

Gaulke says the museum opens up a new round of spots for a fresh intake every four months. The students who get involved are given a theme around which to develop action projects that focus on climate change. 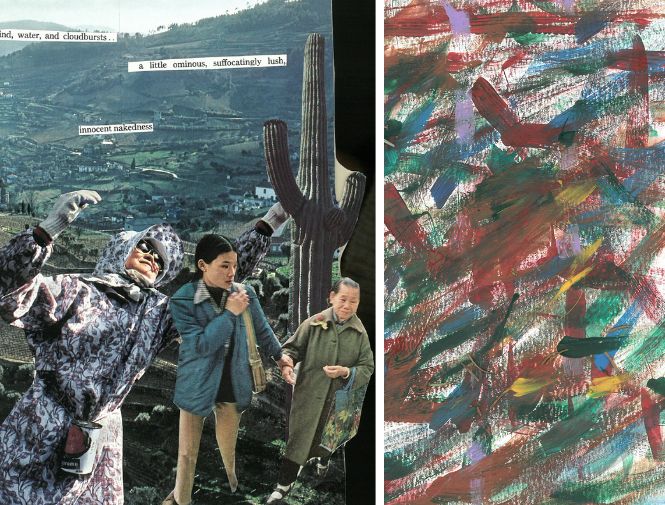 In the past, this has taken many forms, including writing articles, hosting talks in the gallery, or developing digital resources. This spring, with the theme of “land,” they put together the installation that will show in YAC’s ATCO Electric Yukon Youth Gallery.

“The reason land was chosen as a theme was just because it's something that no matter what you do in your life, or how you may interact in here in Alaska, you interact with the landscape in some capacity,” says Gaulke. “Whether that's fishing, hiking, going to school, our land plays such an important role in our lives.”

With that in mind, students worked with community members, artists, museum staff, elders and culture bearers to develop the exhibition.

“We gathered weekly and used museum objects and resources to investigate and discuss climate change and climate issues that we see and talk about it with our guests,” says Gaulke. “So we talked about climate change and the climate crisis, to understand who and what it impacts. Not just the land, the water, the plants and the animals, but also the individuals.”

Gaulke says the group was really ambitious this round. Not only did they explore the topic by way of postcards, collage, ground rubbings of the land around them, digital work and poetry, they created a series of prompts designed to engage audiences, both at the museum in Anchorage, and at YAC.

The plan was to have them travel to the Arctic Arts Summit, but the challenges around international travel right now have made that difficult. Still, she says, the students are excited to see how the show resonates with their northern neighbours during the summit.

“It’s so great to have this opportunity to really uplift and highlight teen voices, particularly here in Alaska, where sometimes it can feel like we're so far away from a lot of things,” says Gaulke.