About
About
NewsYou look sew familiar

Artist Meshell Melvin in front of her exhibit at the Yukon Arts Centre. Mike Thomas photo.

Sometimes it takes a new set of eyes on you to make you feel truly seen. That’s what Meshell Melvin has found as she’s worked on a portrait project currently showing at the Yukon Arts Centre this June.

“It can be quite intimate,” Melvin says of her process, which relies on a Universal Movement Machine—an 1800s-era embroidery machine that creates a chain-stitched contour drawing from fabric and thread. “I’ve had a number of people say ‘wow, nobody’s ever looked at me like this, not even my wife.’ I think it’s because it’s not a critical eye I have. I’m very curious and I’m very interested in all the really subtle differences that I can see in a face. It’s finding those little things that makes the portrait come alive … it’s a different kind of seeing and it’s beautiful to put that into practice.” 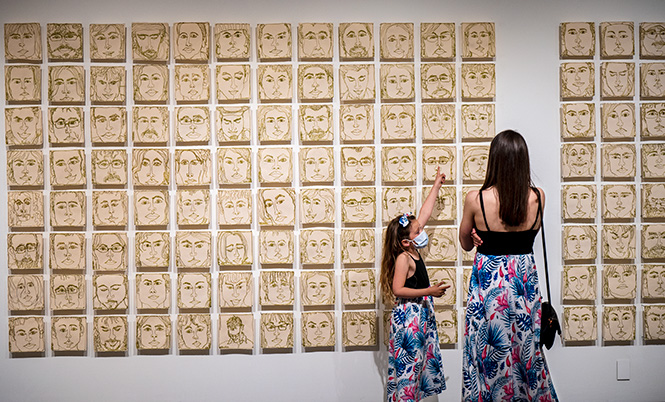 Above and below, people attend the opening reception at the Yukon Arts Centre on June 5. Mike Thomas photos.

It’s a practice she began in 2003, with the long-term goal of capturing every Yukoner. Today, she says she has roughly 1,400 portraits, completed largely at events including the Yukon Riverside Arts Festival in Dawson City and at her former Atlin studio.

When she started, Melvin says she wasn’t prepared for the degree of intimacy the process would entail. It wasn’t like previous work she’d done, quietly sketching portraits on her own in her studio. She would arrive in a public place, set up her equipment, and immediately find herself talking to passers-by. She’d talk to the people who were sitting for portraits as well, sometimes a little too much (“I’d say ‘gee that eye really is bigger than the other one’ and they’d say ‘what?’”).

And while, with hundreds of portraits under her belt at this point, it’s hard to remember every single person, she says people will come back to her on occasion. A month ago, she and a server in a restaurant couldn’t place each other, but knew there was something familiar between them. Back at home, Melvin was sure she found a portrait of the woman. 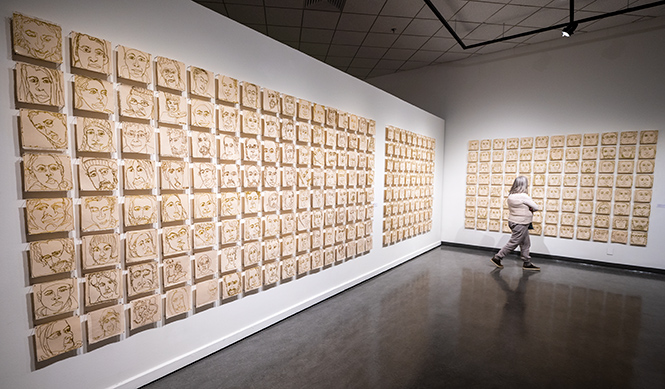 “So some of them come alive for me when I see the portrait again,” she says. There’s a magic in the connection that still sparks long after the work is done. Now, after 18 years of working this way, she feels she’s just starting to get the hang of it—that’s what she hopes people sense when they view the exhibit.

Melvin says there’s a phrase her grandmother used to use all the time — “oh, the humanity!” It comes back to her when she considers her work.

“I think that’s what comes to me. That sense of humanity, our connectedness and how unique and beautiful we are.”

Drawn Together is on display at YAC from June 7 to August 27. The gallery is open Monday -Friday, 10am to 5pm.