About
About
NewsYAC to give people a new place to gather

Cody Bjork-Andison, left and Kevin Jack of Alpine Builders dismantle Alyx Jones’s sculpture, The Thousand Dozen, at the Yukon Arts Centre on October 19. It will be replaced by a fire pit being created by Teslin Tlingit artist Ken Anderson as part of a larger project to Indigenize space at YAC. Mike Thomas photo.

In 2023, the Yukon Arts Centre will invite visitors in by asking them to gather outside. That’s the idea behind a new fire pit being made by Tlingit artist, Ken Anderson.

“This project is looking at more kinds of inclusion in inviting people in and expanding the concept of the Arts Centre beyond just the walls of the place,” says Anderson. “It’s trying to make it more this kind of inviting and kind of a presence that says that all people are welcome here and also acknowledging the history of the land and the people that were here first.”

The piece, which should be installed in summer 2023, is part of an effort on the part of YAC to indigenize the space. In addition to the fire pit, there will be a permanent display of First Nations art on both staircases leading to the mezzanine.

“This work will be truly transformational for the Arts Centre,” says Mary Bradshaw, director of visual arts at YAC. “The fire pit will become a place of ceremony and gathering. This project will change the feeling of this space. (It will) centre the incredibly rich traditions and art by Yukon First Nations.”

Anderson says he wants the work to reflect the First Nations view that ties together nature and the land with art and culture.

“I think some of the best concepts are where things like that are integrated together, where the art is not just kind of an extra, but it's a part of the culture,” he says. 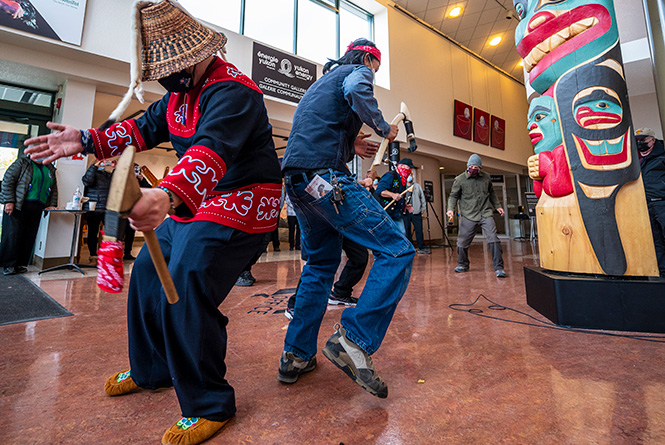 The celebration of the William Yaxkasei Callaghan Commemorative Totem in the YAC lobby in September 2021. Mike Thomas photo.

He says that art and tradition have been tied together for a lot of cultures, but that with European and Western cultures, it feels like they moved away from that perspective, to one where art is seen as sort of an add-on, or an extra, rather than something that’s connected to everything else within that culture.

“In First Nations culture, I think it’s still more rooted in tradition, and the culture and the art are part of the same thing.”

Lisa Dewhurst, First Nations advisor to YAC, agrees. She says a fire pit is central to Indigenous people. Fires are a common starting point. They’re a work of art that also sets the stage and bring people together. Anderson’s, in conjunction with the interior collection (Dewhurst says it will include photographs of First Nations communities, in their regalia, and engaged in culture and traditions), will add life and vitality to the walls while sending a specific message, she says.

“As an Indigenous person, when I go out to a place, it’s nice to see Indigeneity reflected through the space,” says Dewhurst, who is of the Nlaka'pamux nation of Merritt, B.C., and lives in Teslin where she has been adopted into the Kukhittan Clan of the Teslin Tlingit (Raven Children). “It makes you feel more comfortable and you realize there is acknowledgement and respect.”

Dewhurst refers to the William Yaxkasei Callaghan Commemorative Totem, located just inside the front door of YAC and says it’s striking and meaningful to walk in the building and see something like that featured so prominently.

Anderson is in the early stages of the planning process right now, but he’s thinking about how a combination of concrete, tile, metal and brick might come together to create something that still looks natural. The opportunity to figure it out, though, is one he’s looking forward to.

“I think (I wanted to participate because of) the challenge,” he says. “The challenge of trying to make something that's meaningful and contemporary, but also relevant and kind of symbolic of something that invites people in, but is also reflective of a culture that is still evolving.”