About
About
NewsStitches tell stories in Indigenous regalia

There isn’t a stitch on Megan Jensen’s 2013 high school graduation dress that wasn’t sewn with meaning, with intention.

Made from white deer hide, the strapless dress features a painted killer whale, done in turquoise and green. This honours Jensen’s ties to southeast Alaska. The beadwork speaks to the northern connections that stem from her inland Tlingit ancestry.

“It was kind of a mix of my mom knowing who I am and the kind of regalia that I love,” says Jensen, whose Tlingit name is Guná, and who is a member of the Carcross Tagish First Nation. “The process was about making it my own and paying homage to my own history, where I come from, and creating a story with the dress … when it comes to our art forms, there is usually always a story. It’s never empty.” 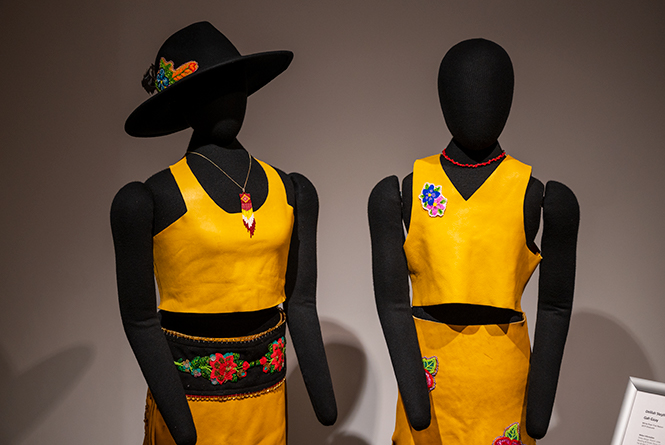 It was a high priority show for curator Lisa Dewhurst when she accepted the position of First Nations advisor to the Yukon Arts Centre in 2020.

Dewhurst, who is of the Nlaka'pamux nation of Merritt, B.C., lives in Teslin. There, she has been adopted into the Kukhittan Clan of the Teslin Tlingit (Raven Children) and has been given the Tlingit name of Keis.ey, which refers to the time just before the dawn breaks.

“The Yukon First Nation Graduation, or ‘Native Grad’ as it has become known, has been occurring since 1975,” says Dewhurst. It takes place in addition to the cap-and-gown ceremonies offered by Yukon high schools, but highlights something special for First Nations grads.

“Many [First Nations] students have to leave their home communities and attend their final high school years in Whitehorse. ‘Native Grad’ has become a shining example of the increasing progress and pride of Indigenous people in the Yukon as culture and language revitalization is celebrated and recognized.”

Dewhurst says the pieces included in the show date back roughly 20 years. Entire communities came together to plan many of the dresses, vests, moccasins and more. Some pieces, she says, are begun years in advance of a student’s graduation. 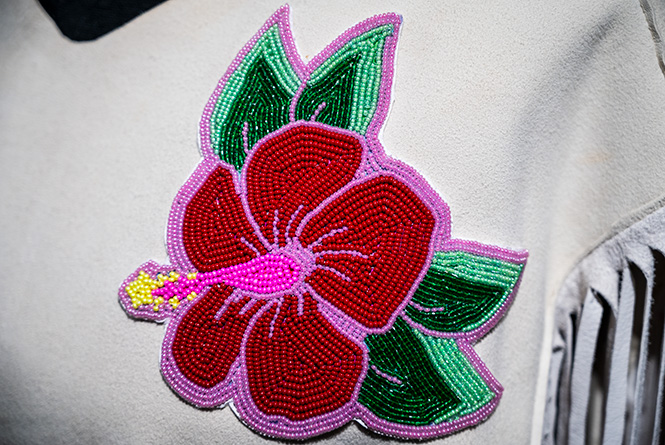 One of the dresses featured in the exhibition came out of a promise two women made to each other when they were in high school—for one to someday sew the dress of the other’s daughter.

“Nobody puts these dresses together in any hurried fashion,” says Dewhurst. “There is so much detail and love put into them … some of them are made with home-tanned moose that, in some cases, takes a whole year to process. There’s different fur on some of them, so that depends on the trapping season.”

The aesthetics are stunning, says Jensen. She encourages audiences to appreciate the skilled beadwork, tufting, tanning, sewing and planning that goes into each design. Then she asks audiences to think about what that design means—what each piece of regalia stands for.

“I think about our struggles in high school, not just passing a class, but the struggle of identity and living in two worlds,” she says. “As Indigenous people, we yearn to practice things on the land, to be with Elders. We put a lot on hold to be able to succeed. The regalia exemplifies the sacrifice and the hard emotional and spiritual alongside the academic work.”

It has taken resilience, she says, for Yukon First Nations to get to the place they are now, where they’re able to celebrate themselves in this way.

“It’s overwhelmingly emotional,” she says. “You feel an extreme, immense sense of love for who you are. It’s a day to celebrate and your identity is heightened when you put on your regalia.”

The exhibit includes regalia from all Yukon First Nations, with the exception of the Ross River Dena Council and the Little Salmon Carmacks First Nation. Dewhurst, who called for submissions on social media and via interviews on CBC radio, says she’d love to include late contributions from those communities, as the exhibition is slated to tour the Yukon once its run finishes at KDCC. 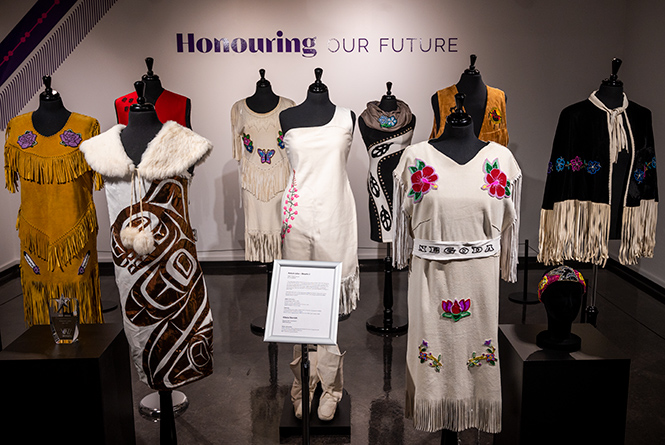 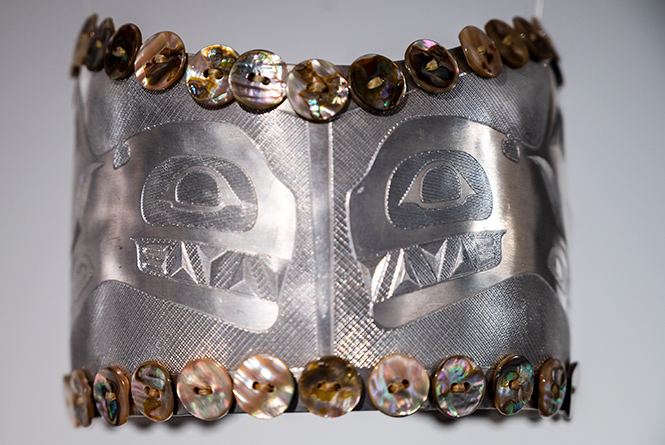