About
About
NewsReaching an audience through the airwaves

Reaching an audience through the airwaves

Nothing highlights the value of narration like making the switch from live theatre to radio plays.

“In our first episode, there was a scene where two women are slapping each other and it came out of nowhere so, in editing, a line had to be added explaining it,” says Robin Sharp, a member of Friends of the Palace Grand (FOTPG). “Without seeing it, you didn’t know what was going on. There was a learning curve.”

In fact, the whole 2020 season has been a learning curve, says Sharp. It started earlier this summer when FOTPG had to decide how it was going to be able to operate.

The non-profit, based in Dawson City and aimed at building capacity for theatre production in the community, has typically mounted live events, such as last year’s Cabin of Curiosities, and workshops for those interested in everything from sound and lighting to improv.

The board was trying to decide whether or not it was going to have to return its grant money to funders when a series of radio plays was suggested. Funders agreed the series was an appropriate use of the money and planning began for Encounters of the Yukon—a six-part series of half-hour plays written by playwrights from Whitehorse, Dawson City and Mayo. 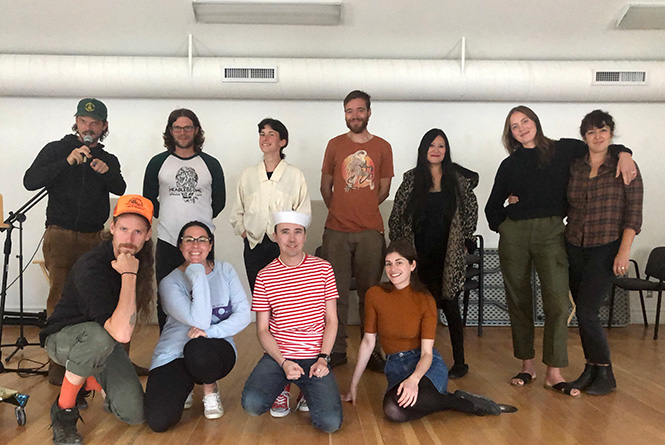 The cast for the radio series Encounters of the Yukon. Photo submitted.

“There’s an interesting range,” Sharp says of the stories. “There’s a story about a UFO, a queer love story between two men who are also a werewolf and a vampire. There’s a Dawson telenovela and an old-timey 1930s adventure about two cheechakos going out and working at a trading post.”

Sharp says the radio format challenged actors and gave them a chance to try something new because, not only does each show have an original score, they had to think about the story from a foley perspective, and come up with ways to produce the everyday sounds that accompany the action in the plays.

It also provided them with opportunities that live acting doesn’t. Because no one can see them, actors didn’t need to memorize all their lines, or spend as much time in rehearsal learning blocking and choreography, which meant the stories could come out more quickly. The invisibility of radio also means actors can play against type, Sharp says, while the focus on sound means they can have fun with accents.

“We also had nine actors,” Sharp says. “That’s a large number. In theatre you could never afford to hire that many performers unless you’re on Broadway. Nine is expensive to employ.”

On radio though, it was no problem. In fact, it even meant there was enough funding for FOTPG to pay roughly a dozen writers—for six full plays and six one-minute plays that air with each longer piece. Sharp says an early interview on CBC elicited submissions from a wide range of new and established writers.

Right now, the plays are being broadcast on CFYT at 106.9 FM. One has already aired. Wallace’s story, When Lost Love Returns! will air at 5 p.m. on Sunday, October 25 and again at 9 p.m. on Wednesday, October 28.