About
About
NewsPutting on the breaks

Putting on the breaks

In a northern example of the butterfly effect, the slow speeds of yesterday’s Internet may be responsible for the rapid growth of today’s breakdancing scene in the Yukon.

Back in the mid-2000s, says Andrea Simpson-Fowler, owner of Leaping Feats (dance studio), streaming in the territory was too slow for anyone to be able to watch instructional YouTube videos. Because of that, when Simpson-Fowler started offering breakdancing classes for boys, she did so with the help of her husband, a former breakdancer, and a set of DVDs she’d purchased. Still, those weren’t quite enough to hold the attention of her students so, as a last-ditch effort, Simpson-Fowler brought up a b-boy company from Toronto.

“And we really lucked out,” she says. “They really knew the history of breakdancing. We happened upon a culture that the boys, not only did they love the dance, but they loved the culture … and it just started this movement. Our boys really wanted to get better and I just got so into it because it was a great way to remove the stigma for boys and dance and then we just had this group of young guys who were so enthusiastic.”

From there, says Simpson-Fowler, as a network of breakdancers grew across Canada, so did interest in the Yukon. Here, it culminated in 2011, with the first Cypherfest Street Dance and Music Festival – a now annual celebration that takes place this year from Thursday July 25 to Sunday July 28. 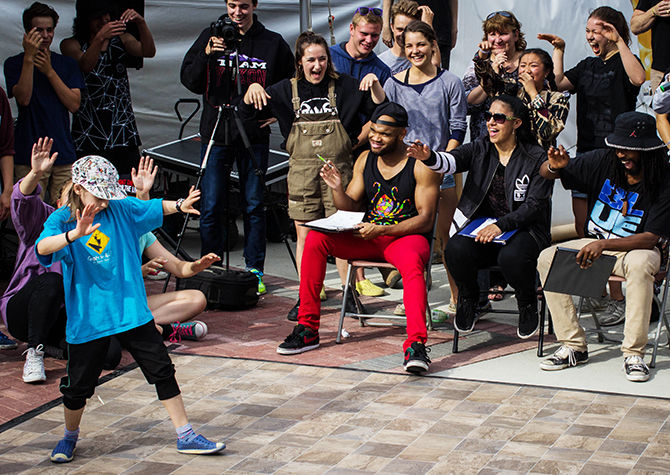 The event kicks off July 25 at 8 p.m. at the MacBride Museum with Vinyl Therapy, a kind of community DJ event where attendees bring and play a record. There will also be live performances from locals Lady C and Jermaine Carter. Admission to this event is $15, or $10 if you bring a record.

The following night is a freebie, with breakdancing battles taking place on Front Street at the Wharf, beside the Old Fire Hall, beginning around 5 p.m. on July 26.

On Saturday, the Yukon Arts Centre hosts locals night, featuring performances from Borealis Soul and the Come Up Kidz.

“We’ve always just invited people that we know,” says Simpson-Fowler of the out-of-town performers. “Through networking initiatives that we’ve done since 2009 and 2010, when we organized Cypher for Change (a festival that focussed on inspiring youth to use dance as a vehicle for positive change in their communities) and brought up 60 b-boys from across Canada, from every province and territory.”

She says it’s just luck that the people they know have gone on to spearhead street dancing initiatives and major movements in Canada. That’s part of what makes it so exciting to look back at this point, she says. What started as trying to support each other on a national level, led to making friends all over the country, led to a star-studded slate of performers at Cypherfest year after year.

And they’re all only getting better, she says. With a number of companies taking street dancing into the realm of theatre, Simpson-Fowler says she can’t wait to see how the form continues to grow. A Toronto troupe called Gadfly won a Dora Award. Noted dancer and choreographer Brian Webb mentored Ottawa dancer Crazy Smooth on how to bring hip hop production into theatres. So it’s growing, across Canada and in the Yukon, where Simpson-Fowler says there are now 100 young men involved with classes at her studio. Cypherfest is one opportunity for Whitehorse to see what they’re doing and where they’re heading.