About
About
NewsOf myths and motherboards

Of myths and motherboards

Lillian Loponen’s family is spread across Canada, but her most recent exhibition at the Yukon Arts Centre Gallery brought them together. That’s because Loponen, a painter who works in watercolour and acrylics, collaborated on the piece with her three sons, Shawn Stephenson, Justin Stephenson and Chris Stephenson.

“It’s the first time I’ve worked on something with my sons,” she says over the phone a week after her exhibition, Into the Kalevala, opened. “It’s quite common that musical families will collaborate, but it’s not common in the multimedia world, so it kind of sets a precedent … I’m delighted.”

Loponen says she first asked her sons in 2016 if they might be interested in collaborating. At the time, she finally felt ready to tackle a concept she’d been thinking about, on and off, since 1989. That was the year an aunt sent Loponen an English translation of the Kalevala—an epic Finnish collection of traditional oral tales about the world, myth and nature, one that weaves stories of gods together with those of ordinary people living in unforgiving environments.

With the help of an Advanced Artist Award in 2015, Loponen travelled to Finland to attend an artist residency outside of Koli National Park, a place that’s known for having inspired J.R.R. Tolkein’s Lord of the Rings trilogy. Two years later, she continued to advance her ideas during a Ted Harrison Artist Retreat. In 2018, she was offered a Jenni House residency to further work on paintings for the show.

Throughout the process, she sent words, images and emails to her sons. To Shawn, a musician who researched Finnish instruments in order to write music for the show. To Justin, who works in film and put together a video inspired by Loponen’s images. To Chris, whose writing runs throughout the exhibition.

She says it was a funny process, of sending along bits and pieces she thought might help her sons (two of whom were with her for parts of her time in Finland) find their way into the soul of the work.

“I just trusted that all of them would find their way,” she says of the year-long process, which resulted in an interactive multimedia installation. “And I’m so pleased with all their products. The opening was a magical evening.”

Contrasting the dark Finnish forests and sense of old-world mythology of Into the Kalevala is Ubiquitous, a concurrent exhibition at YAC.

Yukon artist Leslie Leong is behind the show, which considers the prevalence of technology in our lives and the degree to which our adoption of it may be addictive.

Leong uses discarded computer parts to create what she calls “e-scapes.” She says she started working with computer parts as a medium in 2005. At the time, she and her son had taken apart an old computer as an educational experience. When Leong saw all the intricate details and the gold contacts inside, she couldn’t imagine throwing them away. 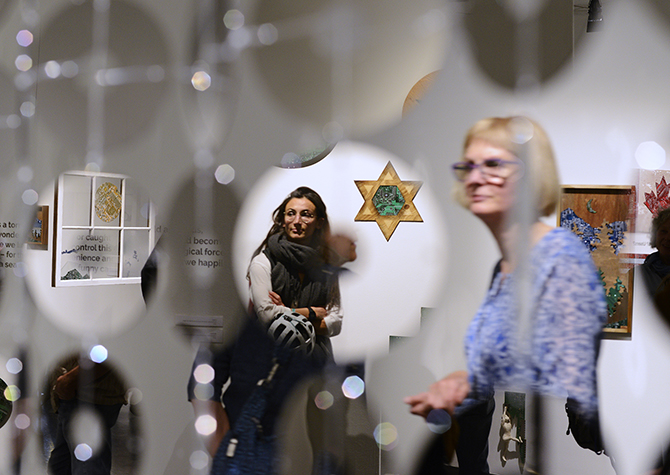 “It was so beautiful, I thought ‘I have to do something with that.’”

Initially, it was jewellery, which she still makes. Then, in 2014, she started making large-scale pieces for a show called Insidious. She says she’s building off the themes of that show with Ubiquitous by responding to questions she has around what it means that social media networks such as Facebook have more users than the biggest country in the world has citizens?

“What does that mean when there is one organization that has that kind of access and we know it’s happening?” she says. “Are we followers, citizens or users? Yes, we are all of those, but are we going into an area where we align ourselves more with Facebook than with our towns? Our cities? Our countries? And what does that mean to our identity?”

Leong isn’t saying technology is bad. In fact, she doesn’t think that, at this point, we can reject it. What she does think we can do is be aware of its negative aspects. Feel and think and talk about whether we are acting or reacting to where technology is leading us.

“We need to be ahead of technology and think about what’s happening so we have things in place to manage technology and make it serve human society and our environment.”

Ubiquitous and Into the Kalevala shows run until Nov. 22.