About
About
NewsNew prize gives artists time and space to create

With artwork by Joseph Tisiga in the background, Julie Jai announces the Yukon Prize for Visual Arts during a press conference in the Yukon Energy Community Gallery at the Yukon Arts Centre on June 25. Julie and her husband, David Trick, are funding the prize. Photo by Mike Thomas.

Artists are the best judges of what they need. That’s why a new $20,000 prize in the territory isn’t tied to any particular project proposal. Instead, it’s tied simply to the quality of an artist’s work.

“We didn’t want to put (artists) in a position where we are weighing proposals, is this one better than that one?” says Julie Jai, who, along with her husband, David Trick, created the Yukon Prize for Visual Arts, announced June 25 “The jurors will look at excellence in art. This makes it more accessible and respects the fact that artists know best what to use the money for.”

In founding the prize, which Jai and Trick developed over the course of a couple years, they wanted to ensure it would be something lasting, and something that would meet the stated needs of Yukon artists. To do this, they worked with a committee of volunteers, consulting and researching how best to make the fund a reality. One of those volunteers was Duncan Sinclair, president of Jazz Yukon. 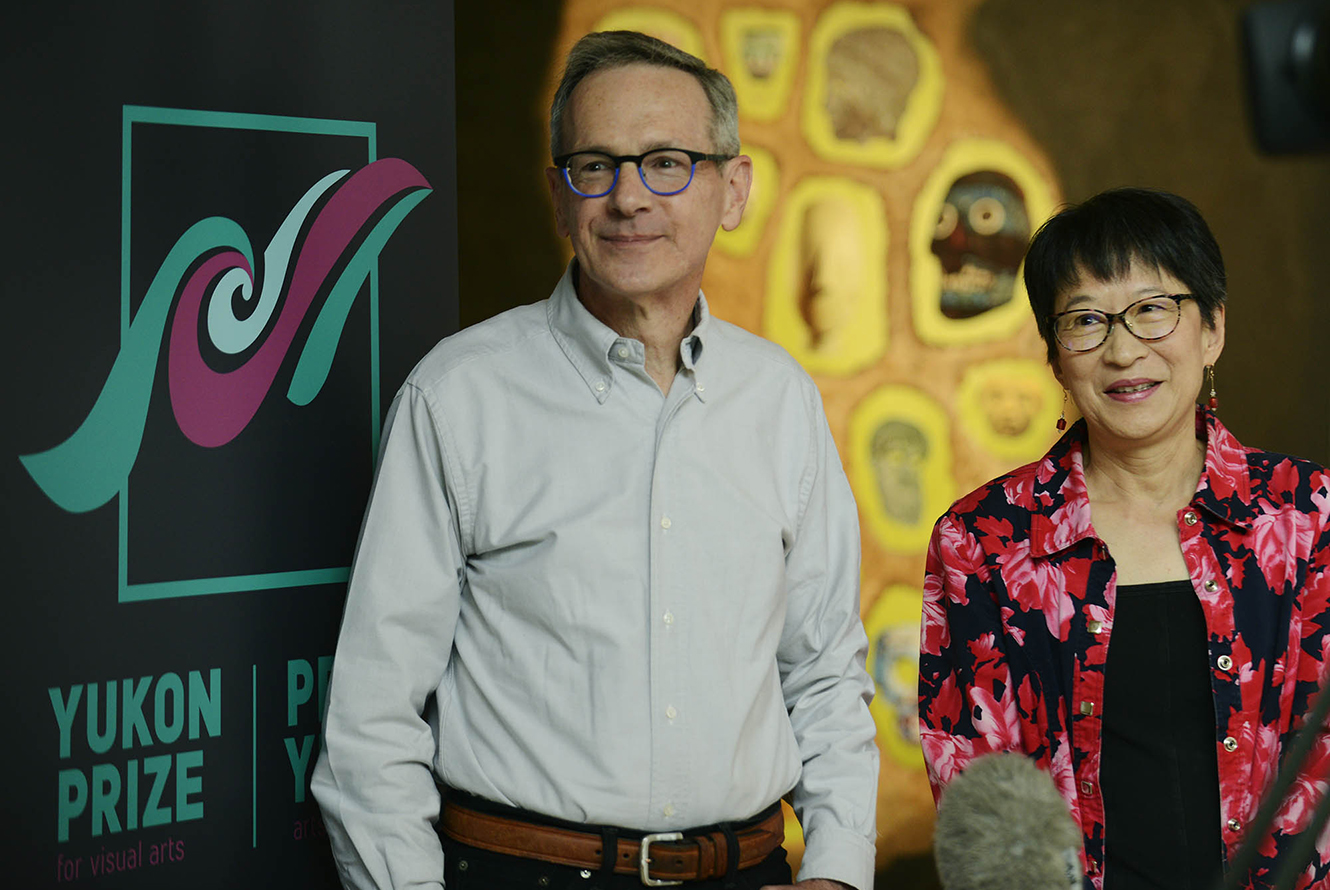 David Trick and Julie Jai during an interview with the CBC during the press conference on June 25. Photo by Mike Thomas.

“People, real people from the private sector, have stepped up to create an exceptional opportunity for Yukon’s visual artists,” says Sinclair of Jai and Trick (Jai has worked in the Yukon and Ontario as a lawyer, mediator and tribunal member, while Trick runs his own consulting business, specializing in higher education). “They are to be celebrated as much as the artists. Only good will come of this, building Yukon’s visual arts sector regionally and nationally.”

That’s one of the main goals of the prize, says Jai. In addition to providing a financial boost that will allow the chosen artist to focus full-time on their work (the five other shortlisted artists will also receive $1,000 each), Jai and Trick say they want the prize to promote Yukon art and artists outside of the territory.

“One of the issues is that the Yukon has an incredibly rich arts community and people here are supportive of visual arts,” says Jai. “But there is not very much communication with people outside of the Yukon.”

“There are so many people here who really ought to be known nationally,” says Trick. “We do live in both Toronto and the Yukon, so we kind of live between those two worlds and we see the really big business of art, where people pay hundreds of thousands of dollars and then we see really good art here at Arts Underground for $150.”

Because of this, Jai and Trick put together a jury of three curators whose names are known across Canada’s artscape. These include Candice Hopkins, a citizen of the Carcross/Tagish First Nation, who is now an independent curator based in Ottawa; Ryan Doherty, chief curator of Contemporary Calgary; and Gaëtane Verna, director of The Power Plant Contemporary Art Gallery in Toronto.

Jurying applicants will introduce all three curators to the work of Yukon artists, which Jai and Trick hope will contribute to building the reputation of Yukon artists in the south, leading to more shows Outside, interest from collectors, and the ability for northern artists to increase their prices.

“(It) celebrates the power of Yukon visual art by inviting a national dialogue and critical discourse,” says Mary Bradshaw, director of visual arts at the Yukon Arts Centre. “The Yukon Arts Centre is thrilled to partner with the Yukon Prize to honour and recognize the incredible talent within the territory. Because of this, the Yukon Prize committee put together a jury of three curators."

Applications for the prize open on January 1, 2021. Applicants must be residents of the Yukon for at least two years prior to the closing date of March 31, 2021. The jury will choose six finalists in June. Those finalists will exhibit as part of a group show at YAC, attended by the three-person jury, in September. The prize will be awarded on an annual, or biennial basis.