About
About
NewsMaking do in Dawson

Making do in Dawson

Julie Nesrallah's show, An Operatic Cabaret Redux, performed at the Klondike Institute of Art & Culture in Dawson City on Feb. 22. Some shows have been cancelled due to the COVID-19 outbreak. Photo by Mike Thomas.

It’s normal to be feeling the cabin fever by the time spring rolls around in the North, but spring 2020 has taken it to a new level, especially in Dawson City.

“Everyone is going a little bit stir-crazy and I think everyone’s adjusting to the reality of it and that it’s going to be this way for a little while,” says Aubyn O’Grady, program director at Dawson’s Yukon School of Visual Arts (SOVA). “Fortunately, this is a pretty nice place to be doing it.”

Marie-Claire Findlay-Brook agrees and says Dawson’s arts community has been adjusting to the current situation.

“I think we went through a couple weeks of holing up and figuring things out,” says Findlay-Brook, executive director of the Klondike Institute of Art and Culture (KIAC). “People are still making at home and, in the next few weeks, I think people will get to the stage of wanting to share it.”

When KIAC made the decision to postpone the Dawson Film Festival until fall, the institute announced the quarantine-proof Ice Solo Elation Film Challenge, asking filmmakers to shoot one-minute videos on the theme of isolation. More than 30 submissions were received and are available online at dawsonfilmfest.com.

Come to ma Window (we bored af) is an art crawl that changes work week to week. Rayburn plots points on a map of Dawson, with instructions on when, where and how to see work artists have installed in various windows around town. 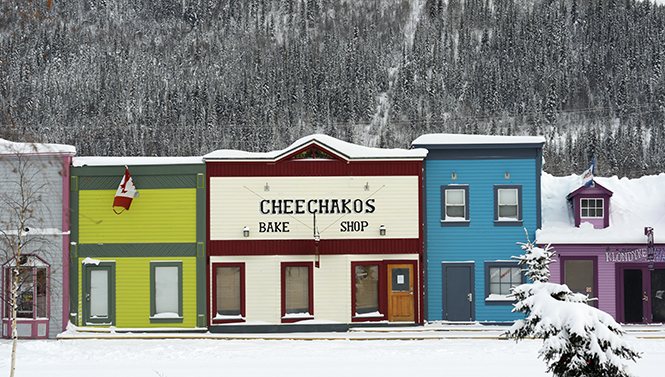 A scene in Dawson City in February. Photo by Mike Thomas.

It allows people to get outside and take in new work at a safe distance from other “gallery” goers.

There’s also the Fireweed Heroes project, which has seen beaders in the Yukon, Northwest Territories and Alaska making lapel pins for healthcare workers (the effort originated in Dawson and eventually extended its pins to all frontline workers), and an online reading group that gathers via Zoom to discuss writing.

Findlay-Brook says there are some events that had to be cancelled (the ODD Gallery is closed indefinitely, a Jeremy Dutcher performance had to be suspended and a youth art enrichment program slated for March couldn’t go ahead), or postponed, such as the Dawson Daily News Print and Publishing Festival.

Still, she says, they’re looking for ways to make sure some events can go on at different times, or in altered formats.

One of those is the end-of-year SOVA show, which O’Grady says is usually a huge community event.

The exhibition, which allows students to showcase their final pieces for the year, will go ahead, albeit digitally.

O’Grady says there have been challenges in supporting the students through the final phase of making in preparation for the show. Some have had to leave the territory to travel home and don’t have great internet connections. Others are working in Dawson, borrowing tools and equipment from SOVA.

On the bright side, she says the semester was wrapping up when restrictions came into effect, so students were in a good place as far as knowing what their pieces were going to look like. Everyone was at the stage where they were prepared to hunker down and work.

An online gallery of that work will launch on April 23. O’Grady says that’s the school’s focus right now. After that, SOVA will look ahead to the fall semester.

She says there are existing models for low-residency classes that take place online. They can be effective, she says, but they’re no substitute for the kind of learning that takes place in person at SOVA, especially in the foundation year when students are learning to interact with each other, critique art and observe each other’s processes.

“And also, the most interesting part of this program, I think, and a really important part of it, I think, is actually being in Dawson,” she says.

Findlay-Brook says she thinks sharing will be key—both sharing ideas and sharing completed work, online and in other innovative ways.

“Mostly it feels like we’re at the very beginning,” she says. “People are just kind of waking up and trying to figure out where to go from here. I’m excited to see what will come together.”