About
About
NewsArt in isolation

Art may be created in isolation, but it’s experienced by community. What happens for artists, then, when a community is sequestered the way ours is right now?

Some, such as Whitehorse musician Daniel Janke, look at it as an opportunity to polish their skills. Before the event cancellations and travel bans began, Janke had an April tour scheduled for Toronto and Montreal. In July, he was supposed to go to France.

To prepare, he had already been “woodshedding” on the kora—practicing an instrument he hadn’t played in years. He says he plans to continue with that, in anticipation of things returning to normal.

“We will get through it, it’s just patience and waiting it out,” he says. “Take advantage of this time and do what you do better when you come back out of it.”

Janke also has a commission for an opera project, so he’s doing a lot of writing for that, while also getting around to studio work he’d been putting off. Janke says he hasn’t found it particularly hard to focus amidst the uncertainty of the current pandemic.

Whitehorse musician Claire Ness has. She says March is typically a really creative time for her, but she’s not feeling that this year.

“Springtime is usually really fruitful,” says Ness. “I don’t feel stressed, but maybe my way of dealing with stress is pretending it doesn’t exist … or it could be that I’m constantly stuck at home with my nearly four-year-old.”

Ness says that has made her creative in a different way, by involving her son in her process and doing what he wants to do. So far, that’s included shooting living room music videos which she posts to her Facebook page.

Ness says she hasn’t tried to monetize them and has no plans to livestream concerts. She’s aware that’s one way musicians are trying to remain connected right now, but she doesn’t know how to feel about it.

“There’s something kind of beautiful about everybody doing these livestream concerts, but there’s something kind of scary about it too because this is a time for the music industry where artists are making almost nothing on their recorded music because we’re encouraged to push everyone to Spotify where we make virtually nothing and now we’re encouraged to do these livestreams for virtually nothing as well,” she says. “Live shows were the last vestige of profit for artists and now it’s kind of creating this new normal and creating a precedent for free shows as well.”

All of Ness’s shows have been cancelled for the summer, including a gig at the launch of Yukon University, the Midnight Sun Moppets Kids Festival, the Kluane Bluegrass Festival, a delegation to Tokyo Ness had applied to attend and an album launch she had planned for May.

“The Arctic Winter Games was a big one,” she says. “I was supposed to sing the national anthem and emcee the closing ceremony. I also had three pop-up concerts throughout the week, so it was probably close to $3,000 in contracts.”

Ness is also the producer for the Atlin Music Festival, which announced its cancellation in March. On a personal level, that means Ness is out the $2,000 a month her contract was supposed to bring in over seven months. Professionally, she says Atlin organizers are trying to figure out how they might direct festival funding (maybe a fundraiser, or a mini-festival later in the summer if it’s safe to do so) to support the people of Atlin.

“The festival has a huge economic impact,” she says. “I don’t know the numbers … I can’t even guess, but it’s huge in their annual economy.”

Whitehorse writer Eva Holland is also feeling an economic squeeze this spring, though in a different way than she’d anticipated.

Holland’s book, Nerve, a work of non-fiction that acts as both a memoir of grief and an exploration of facing and conquering fears, comes out April 7. She had cleared her plate of deadlines and freelance work so she could focus on touring in support of the book.

“On the one hand, I feel lucky,” Holland says. “I had planned for a low-income couple of months.” But she hadn’t planned on zero income. A number of her readings and workshops were paid engagements. Now there’s uncertainty about when they might occur.

Same goes for her book launch. It was supposed to take place at Wayfarer Oyster House, which is currently only open for takeout. At the beginning of March, Holland says she joked about the launch being cancelled. It didn’t seem possible then, that the whole book tour might be put on hold indefinitely.

Right now, Holland is focusing on the things that can be done as planned. Mac’s Fireweed is selling copies of Nerve and her publicist is setting up radio interviews and podcast appearances, hoping to get the book out there.

“It’s such a weird position to be in, of feeling like you’re schilling a product at this moment, but I also earnestly believe it might be helpful for some people to think about how fear and anxiety manifest,” she says. Her book, which delves into the science behind such feelings (including the way emotional symptoms can manifest as a physical reaction), might be helpful to readers looking to change their relationship to anxiety.

It’s something a lot of people have been thinking about, including Whitehorse artist Nicole Bauberger. 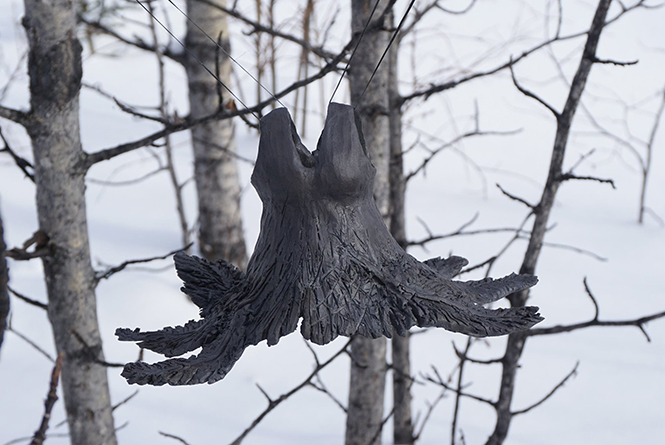 “I certainly have had my moments of deep anxiety, especially thinking ‘well, on the one hand it’s like, woo-hoo, studio time, make me stay at home, that’s good, I’ll actually get shit done,’” she says. On the other hand, however, is the financial insecurity that accompanies a prolonged period of time spent working without showing, or selling.

Bauberger is chair of Yukon Artists at Work. The co-op made the decision to close its doors this spring.

“The problem there is we are not a grant-funded body,” says Bauberger. “So we are still going to have to pay rent. We are a not-for-profit and we operate a business, but we don’t have anything like a credit rating, so we’re still exploring what might be possible in terms of support for us as we go forward.”

In her own arts practice, she says there have been some unexpected surprises. Bauberger was slated to show at the cultural marketplace during the Arctic Winter Games. Since the games’cancellation, the Arctic Winter Games, along with the Canadian Northern Economic Development Agency, have offered to buy up to $525 worth of work from marketplace artists, to cover the cost of materials and time spent preparing for the event.

“That’s super wonderful,” she says. “It’s nice to get that kind of news.”

That helps with some of the economics for her as an artist, but it doesn’t scratch the itch to show, which is where Bauberger got creative.

“As an artist, there are different times in your life, whether it’s the time of showing or going into the studio and rummaging around in the unknowns,” she says.

Bauberger spent the winter in the “studio rummaging” phase, which resulted in a lot of tiny ceramic dresses.

“Some were starting to whisper that they want to be out where they can be seen, which is also part of the work of being an artist.”

That’s why she hung them in the trees behind her Hillcrest home and made a little sign announcing the Dalton Trail Trail Gallery. She also has a Facebook page under the same name, so people can view the work without having to leave home.

“As artists, we deal with weird constraints all the time, so I’m used to taking some kind of weird constraint and doing something with it,” she says. “(Art) can be a way of making places for human connection across or through the existing constraints.”

For example, her neighbours started stringing little works in their own trees shortly after she mounted her ceramic dresses.

“It means that they heard what I said, and not only did they hear it, it turned into their own song and that’s what art is for in any circumstance.”