About
About
NewsArt collection going digital

The Yukon Arts Centre is about to launch the first digitized collection of work in the Yukon, a significant move for many reasons, says Mary Bradshaw, director of visual arts at YAC.

“It’s been such a long time coming,” she says. “And frankly, it’s a real gap in Canadian art history. There aren’t any collections of Yukon work other than here in the Yukon and it’s not online, so if you go and google any of this, there’s nothing. There’s no other museums in the country that are collecting Yukon art in any big way.”

Not only is digitization a way to fill that gap for the rest of Canada, it goes a long way toward meeting the needs of the Yukon artists included in the collection. Bradshaw says she regularly hears that there is great support for Yukon art in the Yukon, but it can be tough to catch the attention of curators outside the territory. 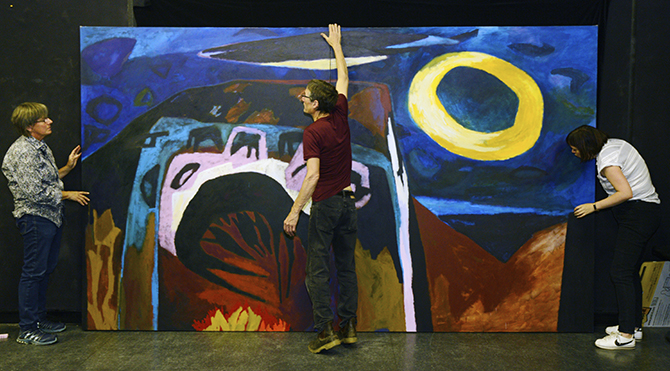 “This is part of the reason you want to be in a collection, is that it is helping to recognize them as an artist and get more information about them out there in the world. In a lot of ways, I feel like it’s kind of part of our duty,” she says.

Until now, the majority of the nearly 120 pieces in YAC’s permanent collection have been kept in the kind of vault you’d find in an art-meets-espionage film – behind sliding panels and three-spoke handles that, when turned, separate storage sections. This summer though, each piece was photographed for the website.

There are smaller two-dimensional works, including Ted Harrison’s Cremation of Sam McGee pieces. There are delicate three-dimensional works, such as a doll, dressed in tiny beaded mitts and a polar bear fur ruff, made by Lena White and First Nations elder Annie Smith for the Arctic Winter Games in 2012. There are newer collages from the Yukon’s Joseph Tisiga and the oldest pieces, two 1918 depictions of the Klondike done by Howard Chandler Christie, a New York illustrator.

Some of the most significant pieces, she says, are two Jim Logan paintings, one of which is a re-imagining of Michelangelo’s The Creation of Man, from an Indigenous perspective. The other is an Indigenous take on Benjamin West’s The Death of General Wolfe, where Logan has swapped out Wolfe for Lakota Chief Big Foot. 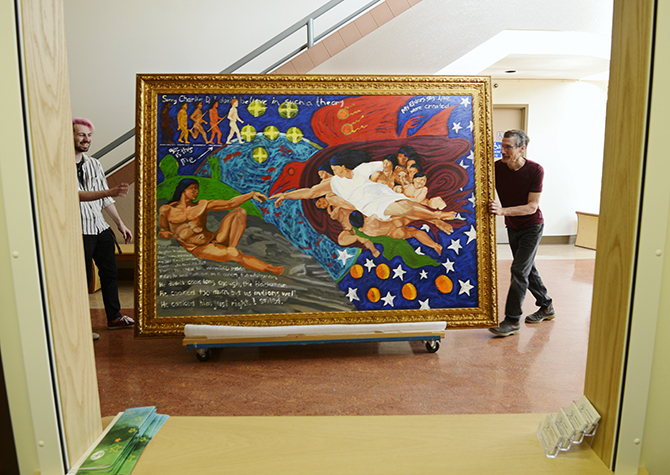 Yukon artist Suzanne Paleczny has two pieces in the permanent collection. One, Snow Carver, is a painting that hangs in the lobby. Another, Icarus Descending, is a large-scale sculpture, also in the lobby.

She says being part of a permanent collection is a big deal for any artist. It’s even more significant if you work on the scale she does, she says, because she knows the work will be properly stored and taken care of. And having it available online means it will reach a broader audience, she says. Showing work outside the territory, especially when your work is as large as some of hers is, can be prohibitively expensive. Not only that, she thinks displaying it all in one place provides an important window into the Yukon for people who have never been.

“The artwork that’s in the collection really says something about the character of the Yukon and Yukon artists so for somebody to be able to collectively look at that, it really gives a sense of the place,” she says.

Ken Anderson also has two pieces in the collection, both done in the northwest coast style of his Tlingit heritage. He says it was an honour when YAC bought the works in 2004 and he thinks it’s fantastic the paintings, which hang by the staircase at YAC, are going to be more widely available via the online catalogue.

“With many art galleries or museums, most of the work isn’t seen so I think this is fantastic, especially in this day and age where everybody’s on their phones,” he says.

Bradshaw agrees. She says YAC is aiming to have the collection online and searchable later in the fall. It will be periodically updated as YAC acquires new work.

Funding for the project is provided by the Yukon Government's Community Development Fund.

Centre image: A Jim Logan piece, A Rethinking on the Western Front (Acrylic on canvas, 1992), is moved back into the storage vault by Scott Price and Patrick Amyotte after being photographed.

Bottom image: Cathie Arcbould, Scott Price and Mary Bradshaw set up the next painting to be photographed: Landon McKenzie, Cluny II: An Anniversary of a Yukon Summer Solstice, 1983, Acrylic on canvas.