About
About
NewsA podium that says as much as the speaker

A podium that says as much as the speaker

The most recent acquisition of the Yukon Arts Centre made its debut in December, but if you missed its unveiling, there will be ample opportunity to see it in the coming years. It will be a staple of events and openings at YAC for the foreseeable future.

The piece is a podium made by master carver, Ken Anderson. It’s carved from red and yellow cedar, a combination that allowed for both the durability and artistic expression Anderson had in mind when conceiving of the project. It will serve as a focal point at YAC events—the place where people stand to welcome attendees and where they stand to introduce and explain their own artistic endeavours.

Anderson says he thought a lot about the role of a podium during the five months he spent carving and crafting this one for YAC. 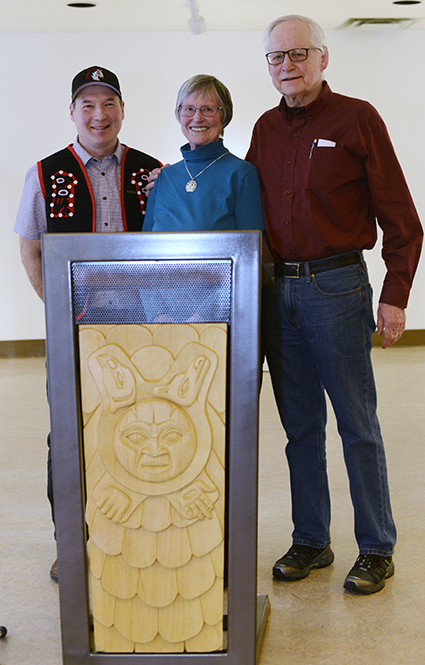 Anderson, who is of mixed Teslin, Tlingit and Scandinavian descent, knew the podium will help introduce countless exhibitions and installations being displayed in Whitehorse, the traditional territory of the Kwanlin Dün First Nation and the Ta'an Kwäch'än Council. He wanted the podium to recognize that fact—that those first nations have lived and travelled through this city for a long time.

“(I hope) that people are more aware of the history of the land,” he says, reflecting on what he wants YAC visitors to take away from the podium. “And that when people share their thoughts and expressions, art and culture, we are witnessing the best of what we as people have to offer each other and that we are truly privileged.”

Anderson’s expression and intent were paramount in commissioning the podium, according to Ron and Kip Veale, who approached Anderson and YAC about the project in 2019.

“The old (podium) was functional, but didn't make a statement to a captive audience,” says Ron. “So we asked Ken Anderson to take a commission and we were blown away with such an artistic and welcoming Yukon first nation carving to remind Yukoners and visitors of our rich cultural heritage.”

For its part, YAC was thrilled with the Veales’ offer. Individuals sometimes gift existing works to the centre’s collection, but commissions are rare.

In this case, all parties handed over complete control to Anderson, which Anderson says is important and appreciated.

“(I had) total freedom from both YAC and the Veales,” says Anderson. “(That’s) every artist’s dream and a testament to people letting people do their jobs.”