What's On
What's On
The Permanent CollectionGwich’in Moccasins 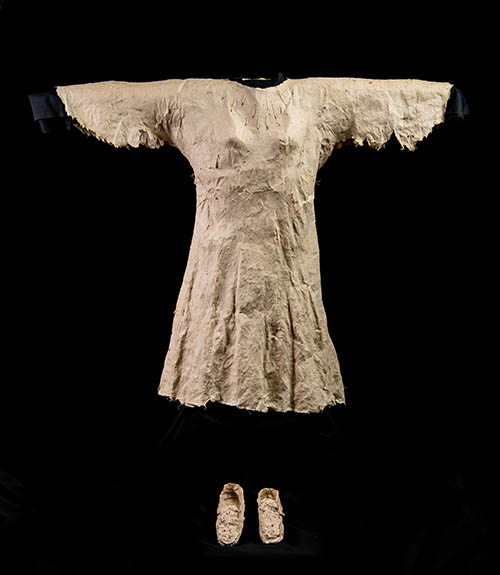 Jackie Olsen’s hand-made paper dress and moccasins were created in response to the Government of Canada’s approval of Bill C-31 in 1985. This legislation sought to challenge the discriminatory sections of the Indian Act, such as the governance of status. The passing of this bill resulted in the reinstatement of status to thousands of Indigenous individuals, including Olsen, who, due to her Danish/Thah-Gwich’in background was previously refused her rights. This pivotal moment prompted Olsen to explore her mother’s ancestral heritage that had legally been taken away from her. In Gwich’in Dress and Moccasins, Olsen has made paper from burr stock fibre to construct the garment and footwear, which she adorns with porcupine quills and pine needles. The paper is sinuous in its fragility, simulating the effect of tanned hide while evoking the historical document that incited its creation.