About
About
NewsFour new exhibits open for March 7 art extravaganza

When Jane Isakson and Kaisu Koivisto opened their exhibition in the main gallery at the Yukon Arts Centre this March, it wasn’t the first time the artists had shared close quarters.

The pair first met during a three-week artist residency, held aboard a tall ship that traveled the waters around the International Territory of Svalbard, roughly 900 km from the North Pole.

In a case of things coming full circle, both Isakson’s show, Points of Reference/Fracturing the Sublime, and Koivisto’s Topophilia, are direct responses to that residency.

“It was really a unique experience,” says Isakson of the trip, which took place in 2013. “I anticipated lots of it because I knew there would be a lot of restrictions due to the logistics of people on a ship.

“That ended up being mimicked on the land too though, which I hadn’t anticipated. We had to be corralled by a polar bear watch (whenever we got off the ship), so we were sort of restricted in this huge open expanse and confined within it.”

Because of those circumstances, Isakson had to find a new way to work. On a very basic level, it was too cold to sit down and draw or paint, so, instead of pencils and paper, she brought sticks, strings and candles into the field, with an eye to mapping her place in the wide-open spaces where she was yet limited.

Additionally, because of those physical constraints, she had to use her mind to move through the landscape, which was disorienting.

“Perception is the thing I came home thinking about,” she says.

“I’ve had that before (in natural spaces), where you don’t really have the normal points of reference, so it gets confusing with distance and there’s a lot of inaccuracy and when you find out, you’re quite surprised. When you’re making judgements and they’re wrong and that kind of puts you in your place. You’re just … wrong. It’s surprising how much perception can be affected by so many things. Not just things like the size of things but the way you’re experiencing things, your other points of reference, your personal experience. It can be so different, what we’re all experiencing.”

Koivisto says that showing her photos, videos and sculptures alongside Isakson’s paintings works to illustrate this difference.

Both artists focus on landscape and concepts of nature and beauty through somewhat abstract form, but Koivisto says her work is always viewed through the lens of technology, which is absent from Isakson’s.

Still, she says she formed a real attachment to the northern Norwegian land she focused on for this show, and felt it was significant to exhibit it in a separate northern place.

She says she hopes audiences come away from the show with a curiosity around the different representations of the North, and why and how she and Isakson looked at the landscape the way they did.

That’s one of the reasons Mary Bradshaw, gallery director, is so excited to show Isakson and Koivisto together.

“The two main gallery shows in particular really speak to each other,” she says.

“The others, I think are a nice touch that expresses who we are as a centre, being able to show work from the community, but also, we’re just so thrilled with Charlie’s work. It’s such a sweet, fun thing we’re able to do with that space.”

That space is the ATCO Youth Gallery. The centre has programmed it for 10 years, but exhibitions are usually group shows—a grade six art class, or a group of kids working together on a project.

“It’s rare that we have a kid who’s able to pull together a body of work like this, but Charlie Fidler has been in Cranberry Fair and getting his work out there, so he was on our radar.”

Fidler, 11, has been exhibiting at craft shows and events in Whitehorse since he was nine years old. He draws “whatever comes into my mind.” That usually includes robots, castles, bikes and machines. Fidler works in pencil and ink because it gives him greater control. He’s worked with paint in the past, but he doesn’t like the width of brushes. They don’t allow for the detail he’s seeking when he picks up an ultrafine pen or a sharp pencil.

The nineteen works he’s prepared to show at YAC range in size from postcard pieces to poster-sized. The larger work is his favourite and what he’d like to focus on as an artist, if a career in the NHL doesn’t work out.

The final show to open in March was Our Journey: Reviving Dena Style Masks. 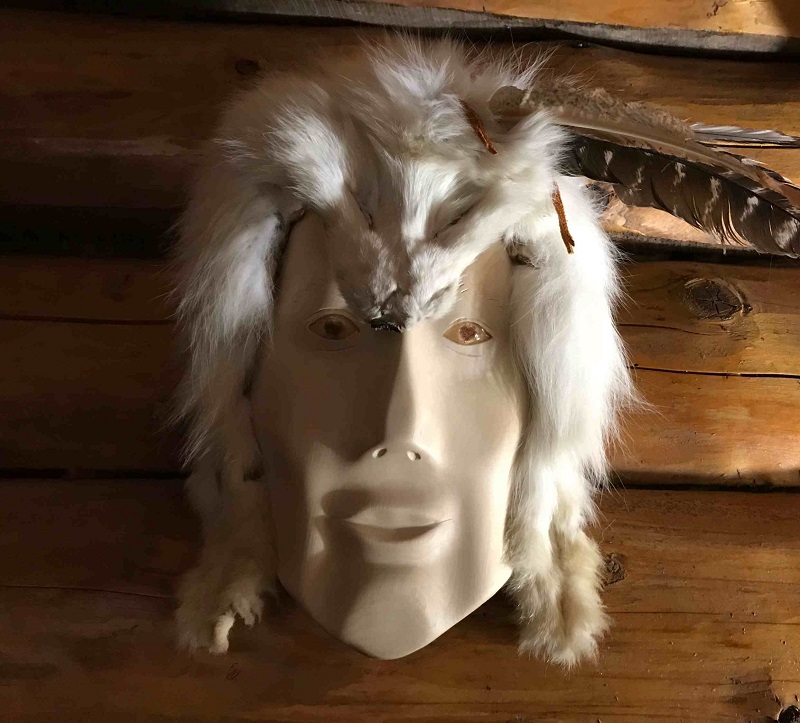 A Ross River community project led by master carver Dennis Shorty, the exhibition is comprised of work from Shorty and five carvers (Kris Bruneau, Paul DeReuter, Tara Roberts, Amanda Roblin and Yvonne Shorty) who learned from him over the course of 2018.

People are familiar with the brightly-coloured style of west coast carvings, but Dene masks are rare. They’re done in a more realistic style, he says, carved and left unpainted. Traditionally, the Dene didn’t have horses, so they used fur rather than horsehair for the beards and moustaches, and to fill the hollowed-out eyes.

Shorty says that in bringing the work to a Whitehorse audience (it showed for one day in Ross River), he hopes viewers will recognize the healing power of artwork and the strength of teaching.

One of Bradshaw’s hopes is that the show will bring attention to the communities.

“It’s such a beautiful example of how art is flourishing within them,” she says.

“The Kaska Dene style masks aren’t part of the bigger picture right now. They’re just not seen when we think about what the Yukon is and what an Indigenous mask from the Yukon might be. So this show is really kind of pushing our expectations and knowledge of what the Indigenous traditions are within out own territory.”

There will be an opening reception on Thursday, March 7 at the gallery 5:30PM-7:30PM. Everyone is welcome!

Amy Kenny is a Yukon-based writer. Her journalism has been published by Up Here, Walrus, Vice, Canadian Geographic, National Geographic Book Publishing, Yukon News and the Hamilton Spectator. Her fiction, poetry, non-fiction and reviews have appeared in Hazlitt, Room, The Antigonish Review, Prism and The Humber Literary Review. She has also written web and promotional content for numerous travel, tourism, health, wildlife and arts organizations.