What's On
What's On
Exhibitions and EventsUnless… 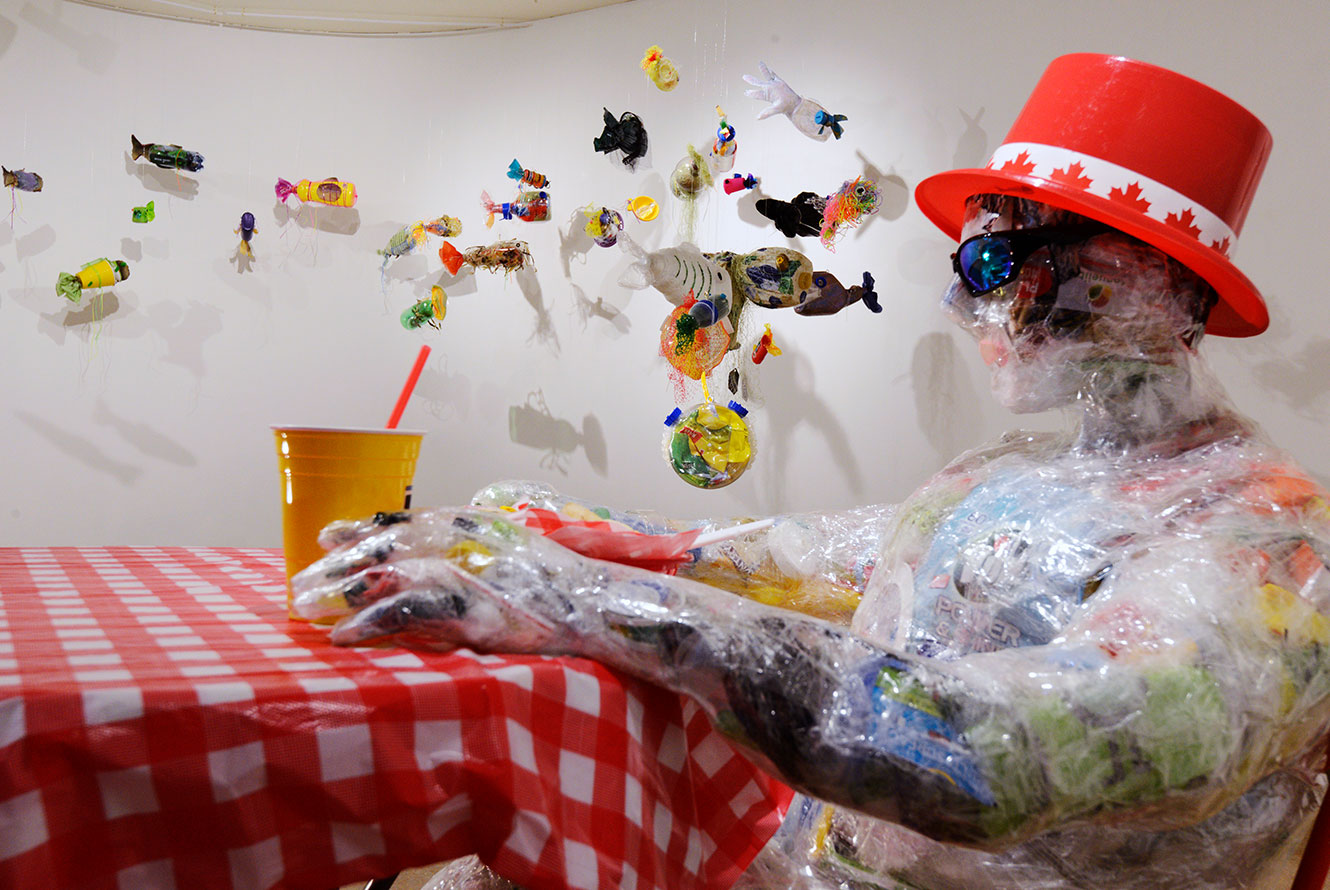 Janet Patterson's new exhibit, titled Unless..., will be on exhibit in the Yukon Energy Community Gallery from December 14-30.

I am a child of the ocean, having been born and raised in Nova Scotia.

Beachcombing has always been a source of recreation and therapy for me. However as the decades have gone on, I have been sickened to find that seashells and ocean-smoothed rocks have been replaced in increasing regularity by plastics of all types.

Even more alarming are the horrific images we’ve all seen of researchers pulling huge wads of plastic waste from the bellies of dead marine animals.

The statistics are heartbreaking. According to the International Union for Conservation of Nature, humans dump at least twelve million tons of plastic into our oceans every year. That’s the equivalent in weight to close to a million city busses. And that number continues to grow; some scientists estimate that by the year 2050, there will be more plastic than fish in our oceans.

As fish eat this plastic, mistaking it for food, they are essentially morphing into plastic frankenfish. As we humans eat those fish, microplastics are accumulating in our own bodies. Like the marine life we consume, we too are becoming plastic.

This exhibit takes this scenario to a devastating conclusion. It is meant to serve as a wake-up call to us all. As Dr. Seuss said in ‘The Lorax’, “Unless someone like you cares a whole awful lot, nothing is going to get better. It’s not.”

The fish you see here are available to purchase, for a minimum donation of $40 each. All the proceeds will go to Plastic Oceans Foundation Canada, a non-profit group aimed at reducing the amount of plastic entering our Canadian oceans. Inquiries: janet@northwestel.net

Thank you to the following people who provided support/inspiration/materials for this show:

Profound gratitude to the Kwanlin Dun First Nation and Ta’an Kwach’an Council on whose beautiful land I live and create.

Janet is an emerging Whitehorse artist who in a previous life was a CBC show host/journalist and later a communications professional. For many years she was involved in the performing arts as a musician/piano instructor and a recreational dancer. She is now focussing on developing her skill as a visual artist.

She is enjoying exploring many different mediums, and currently has a particular interest in creating assemblage art using natural, re-cycled and found objects.

When Janet is not making art, you may find her in her garden, searching out a new hiking trail, on the yoga mat, enjoying time with her five grandchildren, or helping out at the Yukon Artists at Work Gallery where she volunteers one day a week.